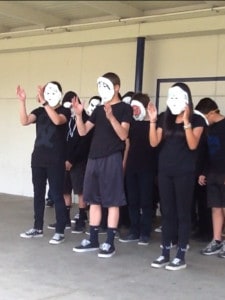 By the time I became an English teacher, they didn’t call the subject “English” any more. I discovered that it was called “Language Arts,” until high school. “Language Arts” sounds closer to the translation of what the Japanese call “Japanese,” which is “Kokugo,” meaning, “country language. In any case, I thought “Language Arts” sounded weird, stilted, somehow “politically correct,” without any apparent reason.

The subject of “Language Arts” or “English” can be broken down into four parts: Reading, Writing, Listening and Speaking. Everything else is details. These four areas can not only be enriched, but, more significantly, happen most naturally, by embedding experiences for students that are considered to be “The Arts.” When I state my belief in doing this to parents each year at Open House, I receive responses of enthusiastic nodding heads. During my summer language classes (Japanese and English) arts, crafts, music, even dance are always a part of the curriculum, because, inspiration, or as Ray Bradbury called it, “The Muse,” is fed when we “stuff ourselves with sounds, sights, smells tastes and textures of people, animals, landscapes, and events.”

The Encyclopedia Brittanica states the definition of “The Arts” as, “modes of expression that use skill or imagination in the creation of aesthetic objects, environments or experiences that can be shared with others.” Day to day, when we are talking about the arts, we are speaking of: visual art, music, dance, film, spoken word, dramatic, comedic or musical performance from either a creator’s or a spectator’s perspective.

For me, Language and Art are not separate. They are not even side-by-side companions. Instead, artistic expression is the culminating demonstration that what has been read, written, heard and spoken has not just been defined or comprehended, applied and analyzed, but that it has been synthesized and evaluated, which are considered the highest demonstrations of learning, according to “Bloom’s Taxonomy.” If a student can read a novel, and create a dance based on the themes in that novel, are they not demonstrating comprehension as assuredly as answering correct answers on a multiple choice test?

Within a couple of years of starting to teach this subject “Language Arts,” I began to put “The Arts” in “Language Arts.” It all started with an e-mail I received one summer when I was checking my school e-mail. The message said something like, “Would you in interested in taking part in an arts integration program…?” I never read the rest; I just e-mailed back, “Yes.” That was 2005.

Nine years later, working every year with the renowned Music Center has led to partnerships with a variety of artists. Every year since, we have delivered quarter-long curriculums of arts based content, while teaching California State mandated Language Arts standards, and then some. Personally, I have learned about the importance of stage presence and how to establish it, about how working toward a performance builds teamwork, or how necessary teamwork is in order to perform. I learned that you can give a performance, but will neither have an audience to play to or money to recoup expenses if you don’t advertise your show properly. Colleagues who have learned these or similar lessons are hooked; if a teacher continues to learn while teaching, you can bet the students are learning right along with us, and often it is the students who are teaching the teachers.

A case study would be the performance my students created this past school year. The culminating activity was a three-part performance of dance, choral recitation and individual spoken word. In order to do this, students listened to a piece of Japanese music and choreographed (wrote) steps in time with the music. They read, chose and memorized passages from famous Japanese literature in translation and spoke them aloud in unison. The learned the steps of creating Haiku, illustrated their poems, and recited them individually. They watched films and read articles on Noh and Kyogen masks and performances, learned about Japanese woodblock printing, calligraphy and customs of chopstick use through articles and film clips, and colored pages of the famous arist Hiroshige’s work, eventually drawing their own Hiroshige-style pictures. They researched and brought Japanese snacks for our performance after party. (See photo)

Through the years, our students have also created and performed a narrated mime performance in Japanese, have learned and performed an emblematic part of Alvin Ailey’s Revelations, have performed choral readings of Pablo Neruda’s Poesia in English and Spanish, have produced both an original school play and, finally, a Broadway play. It bears repeating: the students have done these things, sometimes with only minimal artist and/or adult supervision.

On a recent visit to a private school, that was not (or, not as) beholden to the red tape ofthe public school scenario, from state testing to anti-drugs or violence campaigns, I noticed that visual art graced every surface, from the paint on the outside of the buildings, to the sofa in foyer to the walls of every hallway and classroom. In contrast, public school student artwork is often relegated only to special glass cases.

Too many times, Arts related classes are relegated to the “Electives” arena. Or, an artist is brought in to “teach an art,” while the main teacher tends to other business. Or arts programs are cut as not “essential” or “core.” Yet, when everything else is good in life, humans will often tend to seek out “The Arts” for enjoyment: a movie, a play, a museum, drawing, playing or listening to music.

And it is not only language-related subjects that have arts incorporated into them. All subjects, from Science to Math to, obviously, History, have masterpieces. They have works, within each discipline, that have reached the zenith of excellence, they are works that have changed the world. This is also art, and can be celebrated as such, and by some form of artistic expression (as opposed to just a mutiple choice test) in those classes as well.

Maslow’s “self-actualization” happens when a person is able to “pursue their inner talent, creativity and fulfillment.” ” Enlightenment” or “self-realization,” as defined in Eastern philosophy, is when a person “fulfill’s their own potential.” The twelfth step in twelve-step programs speak of a “spiritual awakening.” I believe that the desire and ability to pursue the arts is a demonstration of this level of human evolution.

The Arts is not a side dish; it is actually the main course.