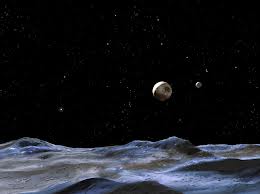 Remember our ninth planet, little Pluto, which was kicked out of the Planetary Club not long ago and relegated to “Dwarf Planet” status? It’s been found to have no less than five moons, and the two most recently discovered ones—previously known as P4 and P5—have now been given official names.

The International Astronomical Union (IAU), which is responsible for naming new sky discoveries, has officially recognized the names Kerberos and Styx for the fourth and fifth moons of Pluto respectively. These names were suggested by voters in a recently held popular contest.

The new moons were discovered in 2011 and 2012 during observations of the Pluto system made with the NASA/ESA Hubble Space Telescope Wide Field Camera 3, and increasing the number of known Pluto moons to five. Kerberos lies between the orbits of Nix and Hydra, two bigger moons discovered by Hubble in 2005, and Styx lies between Charon, the innermost and biggest moon, and Nix. Both have circular orbits assumed to be in the plane of the other satellites in the system. Kerberos has an estimated diameter of 13 to 34 kilometers, and Styx is thought to be irregular in shape and is 10 to 25 kilometers across.

The IAU acts as the arbiter of the naming process of celestial bodies, and is advised and supported by astronomers active in different fields. On discovery, astronomical objects receive unambiguous and official catalogue designations. When common names are assigned, the IAU rules ensure that the names work across different languages and cultures in order to support collaborative worldwide research and avoid confusion.

After the discovery, the leader of the research team, Mark Showalter (SETI Institute), decided to call for a public vote to suggest names for the two objects. To be consistent with the names of the other Pluto satellites, the names had to be picked from classical mythology, in particular with reference to the underworld—the realm where the souls of the deceased were thought to go in the afterlife. The contest concluded with the proposed names Vulcan, Cerberus and Styx ranking first, second and third respectively. Showalter submitted Vulcan and Cerberus to the IAU where the Working Group for Planetary System Nomenclature discussed the names for approval.

However, the name Vulcan had already been used for a hypothetical planet thought to exist between Mercury and the Sun. Although this planet was found not to exist, the term “vulcanoid” remains attached to any asteroid with an orbit inside that of Mercury, and the name Vulcan could not be accepted for one of Pluto’s satellites (also, Vulcan does not fit into the underworld mythology scheme). Instead, the third most popular name was chosen—Styx, the name of the goddess who ruled over the underworld river, also called the Styx.

After a final deliberation, the IAU agreed to change Cerberus to Kerberos—the Greek spelling of the word—to avoid confusion with an asteroid called 1865 Cerberus. According to mythology, Cerberus, or Kerberos in Greek, was a many-headed dog that guarded the entrance to the underworld.