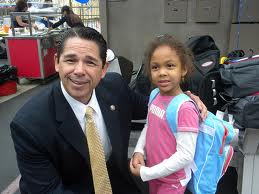 Former Culver City Mayor Christopher Armenta has revealed plans to declare his candidacy for the 54th Assembly District race, the seat currently held by Holly Mitchell.
Saying that a press release would be out shortly, Armenta offered only that he was looking forward to the contest, and would make his official announcement to the public soon.

Pictured here at Upward Bound House’s annual autumn back-pack giveaway in 2011,  Armenta served on the Culver City council for four years, and was seated as the mayor in 2011.