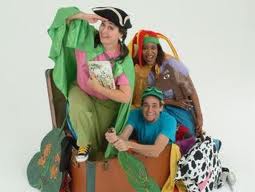 The Culver City Julian Dixon Library is located at 4975 Overland Avenue, Culver City 90230, telephone: 310-559-1676. Performances are every Wednesday at 2:00 pm from June 26th through August 7th and are 45-minutes long. Admission is free.
Partake with us as we eat our way around the globe!

• Wednesday, June 26 at 2 pm:
“Cuentos de la Comida” (stories about food from south of the border)
Macario by B. Traven; The Day It Snowed Tortillas (Mexico); Juan Bobo
(Puerto Rico).

• Wednesday, July 3 at 2 pm:
“A Feast from the East” (food stories from Asia and the Middle East)
How the Rabbit Got Long Ears (China); Shankar and the Magic Elephant (India);
Sweet Rice Dough (Sri Lanka).

• Wednesday, July 17 at 2 pm:
“In the Village of Liver and Onions” (American fairy tales by Carl Sandburg)
The Two Skyscrapers Who Decided to Have a Child; How Bimbo the Snip’s
Thumb Stuck to His Nose When the Wind Changed; Two Boys with Jugs of
Molasses and Secret Ambitions.

• Wednesday, July 24 at 2 pm:
“Food for the Poor” (tales of how the underfed find food)
A Cold Day in Chelm (Jewish); The King’s Fountain by Lloyd Alexander;
Akimba and the Magic Cow (Africa).

• Wednesday, July 31 at 2 pm:
“Let Them Eat Books” (works of great literature with food at their core)
The King’s Breakfast by A.A. Milne; The Walrus and the Carpenter by
Lewis Carroll; Many Moons by James Thurber; The Body and Its Members
by Aesop.

• Wednesday, August 7 at 2 pm:
“I’m Gonna Eatcha” (fun stories about outsmarting the predator)
The Lion in the Well (Africa); The Stone Troll by J.R.R. Tolkien;
Coyote and Rabbit (Native American); The Cat Who Became a Poet
by Margaret Mahy.

In unique We Tell Stories fashion, actors unfurl imaginative costumes and props from an old steamer trunk and the fun begins. Audience members participate from their seats, and then join actors on stage to play integral parts in each performance. Parents and kids delight in this family activity that is both entertaining and culturally enriching.

With a repertoire of twelve “trunk shows,” WTS brings classic literature and folk tales to life in classrooms, theatres, schools, museums, festivals, special events, and libraries. We Tell Stories’ goals are to inspire creativity, enhance literacy, cultivate intercultural awareness and harmony, and spark a love of the theatre and spoken word. Since 1981, WTS has been promoting arts education in schools throughout the Southland with assembly programs, and student & professional development workshops.

These performances are made possible in part by a Culver City Art in Public Places Program Performing Arts Grant with support from Sony Pictures Entertainment. The Culver City Julian Dixon Library is part of the County of Los Angeles Public Library: www.colapublib.org.