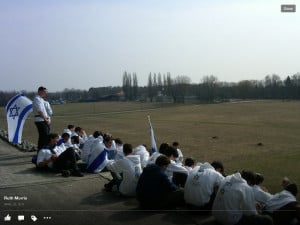 Every year, people from America take part in a tour called “March of the Living.” These are organized tours, where people go to both Poland and Israel, to see sites that have contributed to Jewish culture, yesterday and today. As a former travel industry executive, I can’t bring myself to take part in an organized tour. So, as part of the education I intended to impart on my children, I determined to take my sons with me on an expedition to Poland in Spring of 2011, and then to Israel, in Spring of 2012. My sons were against this plan.

I wrote last time about finding where my great-grand parents were buried on the trip to Poland. Finding graves provides eerie, in-your-face evidence of roots, literally and figuratively. It didn’t feel at all like home there, however, even though I had actually traced at least one branch of my family back to the early 1800’s. That’s 100 years minimum we’d been in a country; about as long as we’ve been here. But there and here, we’re part of a miniscule minority. So, by going to Israel, I thought we might be able to feel what it was like to be in a place where people were like us.

My kids fought me on going to Israel at first; they’d been influenced by the negative press Israel often receives. They feared terrorism in the streets. They finally got convinced to go, however, in the most unlikely of places: Majdanek Concentration Camp.

Perhaps a ten-minute cab ride from the at one time significant Jewish city of Lublin’s main part of the city (the proximity itself a testament against people “not knowing what was going on in the concentration camps.”) We were left off in front of a massive expanse of barracks. No tour buses, no tour guides, no multi-lingual informational guides. Simply, groups of young people (teens to twenties) wearing blue and white, and draping themselves in Israeli flags. (See photo)

As we walked across the concentration camp, trailing behind several different groups of Israeli youth speaking in Hebrew, my older son asked me, “why are they all here?” Student youth groups come annually from Israel on a field trips to learn about Jewish life and death in Eastern Europe. Somehow, I found the presence of mind to answer,”Because this place is about death, but Israel is about life.” My older son thought quietly for a moment, and then said, “OK, we can go to Israel next year.” He’s there now, this time with a group of college friends, on his second trip in two years.

So, Israel it would be – the second half of our Jewish roots experience. Right before the trip, in March 2012, a friend said to me, “It’s the light. Somehow, the light is different there. Everything is brighter.” To this day, I’m not sure if that is a reality of the Mediterranean sun hitting the white buildings of Tel Aviv, or the “Jerusalem stone” buildings in Jerusalem, or if it is actually a metaphor for how it feels to be there.

We felt immediately at home. I recalled what my third-generation Japanese-American friends reported during our Junior Year Abroad in Japan. You ARE an English-speaking American, and absolutely different culturally, but you find kernels of your home life and traditions embedded in the society, and in a moment you understand why you’ve been doing things the way you do.

Maya Angelou expressed it in her autobiographical All God’s Children Need Traveling Shoes: “We were Black Americans in East Africa, where for the first time in our lives, the color of our skin was accepted as correct and normal.” In Israel, for us, it isn’t necessarily a looks or “color of the skin” thing, it is more of a sensibility thing, I have found. Not only did we look like a lot of the people we found in Israel, but, we noticed some of our behaviors reflected in the culture.

I found the society refreshingly “no” free. I tend to believe that anything is possible. A friend recently told me, “Ruth, I’ve never heard you say the words ‘can’t be done.'” Maybe I was just born, or brought up to be this way, but I feel that Israel is a comfortable place for a person like me, because anything and everything is and has been possible there. I recommend the book Start Up Nation by Dan Senor and Saul Singer for more on this subject.

Jews are not the only people who feel this way about Israel, however. As a tourism destination alone, many of my non-Jewish friends have traveled to Israel over this past year. One set of friends went because they had read the book, Jerusalem: A Biography by Simon Sebag Montefiore. I read it after they did, and understood why everyone’s going; Israel is thankfully enjoying a time of relative peace, and, if you have the resources to do so, who would not want to visit an archaeological and historical wonderland, unique as the only democracy in the region?

However, the minute I announced that I intended to write my fourth about Israel, I took flack from various circles. I had to make sure that I didn’t make my article “political.” I don’t know much about politics in any country, including the United States. All I know, is that I’d love to transport everyone I know to the beach at Caesarea, with the well-preserved ruins of a Roman amphitheater on the left, sitting on a pier with all you can eat sushi in front of you, and the ebb and flow of the waves of the Mediterranean on your right. I’d put you in Jerusalem on a Sunday, with the church bells ringing, and priests from various denominations in a procession though the streets. I’d want you to see how the entire town of Karmiel gives itself over to a 24-7 dance festival for three days every summer. I’ve felt more grounded, knowing where I’ve come from; somehow, it helps you figure out where to go from here.

Another near and dear subject to me is “The Arts,” which I’ll write more about next time.