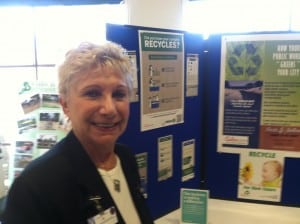 This year the California State Legislature enacted AB341 which mandated recycling in the commercial sector. What did this mean to the business community? It means that businesses that generated more than 4 cubic yards of trash per week, it meant they had to find space for a recycling bin, train their staff to keep the recyclables separate from the trash and, in many cases, reduce their monthly trash bills.

Everyone wants to “do the right thing”; but sometimes it takes a little guidance to find the way. In Culver City the guidance is provided by the city’s new commercial recycling specialist, Joan Satt (pictured here at the Culver City Expo on June 26.)  Joan herself has been recycled. She worked for Culver City as the Waste Reduction Coordinator some years ago and is back now bringing her recycling and waste reduction expertise to the business community.

Joan works with the Environmental Programs and Operations Division of the Public Works Department to ferret out the customers who do not have a recycling program and could benefit from implementing one. One such firm was Haas Entertainment on Uplander Way. Owner, Jeff Haas, former Chair of the Chamber Board, was most receptive to recycling for all of the right environmental reasons. The company had two trash bins each one picked up once a week for a cost of $279.84 per month. By changing one of the trash bins to a mixed recycle bin, the bill was reduced to $170.59 per month . The following is a quote from Jeff Haas regarding the new recycling program. “It is amazing to me that we could save more than $100 a month just by doing the right thing. In these days of tight budgets, every business should look at its trash set up as a way to pare down operating costs. It is easy to do, doesn’t require a radical change and results are great all the way around.”

Sometimes it is a matter of education and a little creativity: what is in the trash bin that can be moved to a recycle bin even if it is not a typically recyclable item? Anderson Plywood is a good example. A simple waste audit found that wood scraps, gigantic plastic bags filled with sawdust and cardboard and a smattering of other recyclables filled the two trash bins. One bin was emptied twice a week, the other was emptied once a week. The total trash bill, including a lock set was $428.92. per month. With a little ingenuity the whole set up was changed to provide a greenwaste bin for lumber scraps, a mixed recycle bin and a trash bin. Each one scheduled for one time a week service.
The new monthly bill is $255.44.

Not everyone can realize a cost saving from recycling and those who cannot can at least feel better about taking care of the planet now and for future generations.