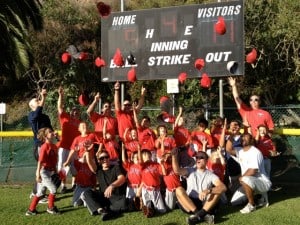 Gerardo (Gerry) Perez is the Manager of the Culver City Little League Double A Angels Championship team and he knows how to throw a pitch. In Double A Little League, the coaches are the ones pitching the game, and Perez has taken his team to the top; King of the Hill.

King of the Hill in this division goes to these kids ranging from 6-9 years old. They went 17 games and went undefeated the entire season.

The Double A rules are just a bit different; game is Coach pitched, 5 pitches are thrown by the team coach and if the batter does not get a hit, they are considered out. However, the majority of the time the kids in this division hit the ball and a traditional game of obtaining 3 outs is played. The team also credits their incredible volunteer support. With 1 Team Manager Gerardo Perez, 2 Coaches Ivan and Ollie Penchansky and Assistant Coach and Team Pitcher Frank Savino along with 5 other dads who showed up regularly every week to practices and games to assist these kids in a great season of baseball! The parent participation on our team made the difference in the level of ball these kids learned and played.

Fundamentals and Fun was at the core of this team. There were two games with triple plays made and several with double plays, which may not sound remarkable, but at this level of baseball, it is nearly unheard of. These kids showed up to all of the practices and games every week, rarely did anyone miss a practice or game. Parents are convinced it had everything to do with amazing coaches who made the season fun! Congrats to the winners!