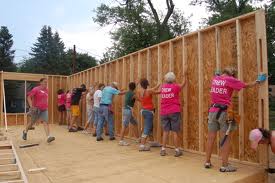 “We were overjoyed by the enthusiastic turnout at this year’s event and amazed by the work that was completed,” said Erin Rank, President and CEO of HFH GLA. “What these women volunteers accomplished on Saturday was nothing short of remarkable. The volunteers, crew leaders and staff deserve a great deal of credit for what this event has become and what it represents.  And, thanks to social media, ‘Power Women Power Tools’ has become a much bigger event, engaging people all over the world!”

Habitat for Humanity has developed a unique design prototype that can be used on multiple sites throughout greater Los Angeles. The 120 walls framed by volunteers at “Power Women Power Tools” will be used for 1,300 sq. feet duplexes that will have 3 bedrooms and 2 ½ bathrooms for partner homeowners.

HFH GLA partner homeowner, Gloria Alfaro, got volunteers into the building spirit during the morning program by sharing how Habitat for Humanity has changed her life. Volunteers also heard from several supporters including the Hon. Meghan Sahli-Wells, Vice-Mayor of Culver City and the Hon. Jan Perry, Los Angeles City Councilmember for the 9th District who both have been instrumental in the plans for a new Habitat neighborhood in Culver City.

However, when HFHFH co-founding member Producer and Director Tom Shadyac introduced partner homeowner Zalikah Templeton and her family during the lunch program, their inspirational story moved the crowd to tears and brought them to their feet for a standing ovation. It was exactly what the women needed to become reenergized for the final hours of the build.

Since 2005, “Power Women Power Tools” has engaged thousands of women from various sectors including corporate, entertainment, education and faith, who have helped build homes both locally and in the hurricane-ravaged Gulf region.