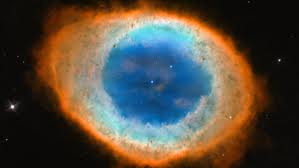 The Ring Nebula’s distinctive shape makes it a popular illustration for astronomy books. But new observations by NASA’s Hubble Space Telescope of this glowing gas shroud around an old, dying, Sun-like star reveal a new twist.

“The nebula is not like a bagel, but rather, it’s like a jelly doughnut, because it’s filled with material in the middle,” said C. Robert O’Dell of Vanderbilt University in Nashville, Tenn. He leads a research team that used Hubble and several ground-based telescopes to obtain the best view yet of the iconic nebula. The images show a more complex structure than astronomers once thought and have allowed them to construct the most precise 3-D model of the nebula.

“With Hubble’s detail, we see a completely different shape than what’s been thought about historically for this classic nebula,” O’Dell said. “The new Hubble observations show the nebula in much clearer detail, and we see things are not as simple as we previously thought.”

The Ring Nebula is about 2,000 light-years from Earth and measures roughly 1 light-year across. Located in the constellation Lyra near the bright star Vega, the nebula is a popular target for amateur astronomers. It can be easily seen, even in most urban skies, with telescopes of 6-inch or larger aperture.

Previous observations had detected the gaseous material in the ring’s central region. But the new view by Hubble’s sharp-eyed Wide Field Camera 3 shows the nebula’s structure in more detail. O’Dell’s team suggests the ring wraps around a blue, football-shaped structure. Each end of the structure protrudes out of opposite sides of the ring.

The nebula is tilted toward Earth so that astronomers see the ring face-on. In the Hubble image, the blue structure is the glow of helium. Radiation from the white dwarf star, the white dot in the center of the ring, is exciting the helium to glow. The white dwarf is the stellar remnant of a Sun-like star that has exhausted its hydrogen fuel and has shed its outer layers of gas to gravitationally collapse to a compact object.

All the glowing gas we see was expelled by the central star about 4,000 years ago. The original star was several times more massive than our Sun. After billions of years converting hydrogen to helium in its core, the star began to run out of fuel. It then ballooned in size, becoming a red giant. During this phase, the star shed its outer gaseous layers into space and began to collapse as fusion reactions began to die out. A gusher of ultraviolet light from the dying star energized the gas, making it glow.

The outer rings were formed when faster-moving gas slammed into slower-moving material. The nebula is expanding at more than 43,000 miles an hour, but the center is moving faster than the expansion of the main ring. O’Dell’s team measured the nebula’s expansion by comparing the new Hubble observations with Hubble studies made in 1998.

The Ring Nebula will continue to expand for another 10,000 years, a short phase in the lifetime of the star. The nebula will become fainter and fainter until it merges with the interstellar medium.

Studying the Ring Nebula’s fate will provide insight into our own Sun’s demise, expected to occur about 6 billion years from now.

In the analysis, the research team also obtained images from the Large Binocular Telescope at the Mount Graham International Observatory in Arizona and spectroscopic data from the San Pedro Martir Observatory in Baja California, Mexico.