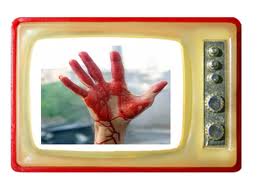 I was at the gym when the news was first breaking – something about pipe bombs, Overland Avenue. One of the things I don’t love about the gym is that there are televisions on all the time. People were feeling threatened that this was so close. A woman next to me exclaimed “Nowhere is safe!”

Well, yes, I thought – or everywhere is safe. Just stop plugging into the bad news.

It’s a challenge and an affront to me that in so many places where we might just talk to each other, there are televisions, mostly blaring out whatever is considered news for the day. Gyms and bars seem to be the worst –  it’s as if someone feels that mere free time or quiet space is a threat to civilization. If you came to relax, too bad – there’s a television, making sure you don’t miss a moment of the next news cycle.

Yesterday’s bad news was mostly bad to folks who had to drive through the area. A girlfriend of mine who lived in London during the IRA bombing campaign in the 1970’s used to say it was like traffic; she’d just plan her day to avoid the areas that were hot spots. Cabbing it instead of using the Tube, or taking the long way around town. One my yoga students who lived in Sarajevo had a similar attitude; “You have to keep living. You have to get the children to school and get dinner on the table. So there are crazy men with weapons, so what?”

You do not have to live in a war zone to have traffic tied up by crazy men with weapons.

I was amused by the fact that yesterday’s suspect was apprehended because he was driving with expired tags and had drugs in the car. To the cops, this is sort of like flying a flag that says “Stop Me Please- I Want to Get Caught.”

That someone would make almost 20 pipe bombs ‘just for fun’ is the sign of serious mental health issues. Considering the address where the explosives were being stored, anyone living in that apartment building already has issues; it’s a dank warren of bizarre hallways with no light or ventilation that smells like last week’s compost. The only sound you will hear as you walk through is too many television sets. How can you talk to your neighbors when the hallway is a place to be avoided ?

This morning, Santa Monica College is on lock down, along with several other schools in the area, leading me to believe there is a crazy man with weapons who has a test he has not studied for in a class he needs to pass.

We can all be on alert, all the time. Or not.

You can ignore the tv, and carry on with whatever you had planned anyway. Unless you need to get the traffic updates, checking in with how awful it all is does not make your priorities any easier to accomplish.

You are safe nowhere, or everywhere, or anywhere. You get to choose what channel gets your attention.