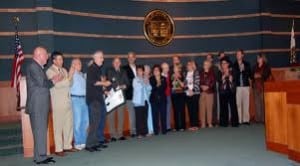 May 13 was almost a step-aerobics class for the Culver City council members, they were up and down from the dais so many times to present proclamations to deserving individuals and organizations for the month of May; Senior Month, Senior Volunteer of the Year, Bike Week, Historical Preservation Month,( see photo)  Echo Horizon Schools raising funds for a cleaner Ballona Creek, Water Conservation awards from the West Basin District…by the time they started in on the agenda it was almost two hours into the meeting. Quite a workout, and for lots of good reasons.

As the only individula presented with a certificate of appreciation last night, Coco Rubelcava was applauded as the Senior Volunteer of the Year for 2013. She was delighted to be lauded for her creative writing and art classes at the Senior Center. “I am very happy,” she said holding her award,” because I know I help people and that makes me feel good.” She also pointed out her grandchildren and great grandchildren as part of her inspiration.

When it was time for the CFO Jeff Muir to offer his presentation on the budget, he was pleased to give the most positive report the city has had in years. Citing the economic recovery, Culver City’s continued growth and the passage of Measure Y, Muir stated “We expect all the funds [in the budget] to end the fiscal year in balance.”

With expenditures scheduled to be $201.2 million and projected revenue at $194.8 million, it’s the least difficult financial presentation that Muir has made in the last five years. “For the first time in a number of years, we can say with some confidence that revenues will cover costs,” he smiled.

With the bulk of expenses going to cover salaries and benefits, (city personnel takes up 74% of the general fund) there are no more jobs cuts needed in the current budget, and Muir projected that the year would be balanced.

The budget will be formally adopted by the city on June 10. For the full report from the financial office, please click here – www.culvercity.org/en/Government/Finance/BudgetBooks.aspx

Plastic bags were banned with a 5 to 0 vote, as expected.