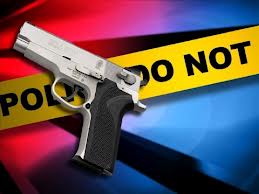 A jury has awarded $8.8 million to the family of a robber who was shot and killed by a Culver City police officer. The Los Angeles Times reported a federal jury issued the verdict on Wednesday, May 8.

Twenty-seven-year-old Lejoy Grissom was killed three years ago after an officer pulled over his car in a parking lot because he suspected Grissom had robbed a local electronics store.

Grissom, 27, was shot around midday on April 25, 2010, after he was pulled over in a parking lot on suspicion he had robbed a nearby electronics store shortly before, said Matthew McNicholas, an attorney for one of Grissom’s four children, all of whom are under the age of 8.

Four other officers and a supervisor responded to the parking lot to assist. With guns drawn, the officers ordered Grissom out of his car, said Dale Galipo, the attorney for the other children. Moments after Grissom exited the vehicle, Officer Luis Martinez fired three rounds, all of which struck Grissom, Galipo said.

The other officers who were at the scene all testified that Grissom was facing them and had nothing in his hands when he was shot, the attorneys said. Martinez, however, claimed that Grissom had his back to the officers and suddenly spun around toward them with a shiny object in his hand that appeared to be a gun, according to the attorneys.

Grissom was found to be unarmed, McNicholas said. None of the other officers fired.

Each of Grissom’s children was awarded $2 million and the jury added $825,000 in additional compensation.

“I’m thrilled for his four children and hope this verdict helps them through the rest of their lives,” McNicholas said.

Galipo added that he had worried the jury would be swayed by Grissom’s criminal life and the danger the officers may have believed themselves to be in when they pulled him over. Galipo said that at the time of the stop, police were aware Grissom was suspected of committing a rash of armed robberies. McNicholas said it was later determined that Grissom did, in fact, rob the electronics store that day.

Culver City Police Chief Don Pedersen said the department and city officials had not yet made the decision whether to appeal the verdict. “We are obviously very, very disappointed,” he said.

Martinez, the chief said, was cleared of any wrongdoing by investigators from the L.A. County Sheriff’s Department, which conducts investigations into officer-involved shootings for Culver City. The district attorney’s office also reviewed the case and concluded Martinez had broken no laws, Pedersen said.

The chief declined to discuss the discrepancy between what Martinez claimed he saw and the testimony of the other officers.