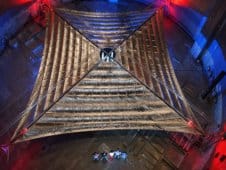 NASA and the UK Space Agency are jointly developing a spacecraft, named Sunjammer (after Arthur C. Clarke’s 1963 short story by that name), which will use a 13,000-square-foot solar sail (see photo) to propel itself nearly two million miles toward the sun. The sail will then help keep the spacecraft in a steady position.

Sensitive instruments on board will provide scientist with an early warning of solar storms that can produce streams of particles capable of damaging satellites and power grids on earth.

Dr. Jonathan Eastwood, a lecturer in physics at Imperial College London, said the mission’s main aim is to demonstrate the use of solar sails as a way of powering and controlling a spacecraft on long missions.

He said it would also give scientists a greater understanding of the solar wind—the stream of particles ejected from the sun—and its impact on the Earth.

Sunjammer will have two UK instruments onboard, flying on the largest solar sail ever constructed. Due for launch in 2014, this NASA-led mission will fly towards the Sun demonstrating solar sail technology and a range of other technologies. UK scientists at Imperial College London are developing the mission’s magnetometer and wind analyzer—instruments that will study space weather.

“The current spacecraft used to monitor the solar wind is only 932,000 miles from Earth,” Eastwood said. “To go any closer to the sun requires a new kind of propellant to hold the spacecraft in place against the pull of the sun’s gravity—and that is what the solar sail will do. Once in position, the sunlight hitting the sail will keep the craft in the same orbit.”

The sail is the largest ever tested—taking up around a third of an acre—but weighs just 70 pounds. Although the amount of thrust generated by the sail will be tiny, it is hoped that solar sails will provide a new solution for long-distant robotic missions.

SAILING TO THE STARS? – Meanwhile, The Planetary Society, based in Pasadena, is also interested in the solar sail as a means of space travel over very long distances—possibly even beyond the Solar System. One of their current projects, called LightSail-1, is designed to test this concept.

A solar sail propelled by light pressure is the only known technology that might carry out practical interstellar flight, helping pave our way to the stars. The idea of light pressure as a means of space travel has been around a very long time. In the 17th century, astronomy pioneer Johannes Kepler observed that comet tails point away from the Sun and suggested that the sun caused this effect. In a letter to Galileo in 1610 he wrote, “Provide ships or sails adapted to the heavenly breezes, and there will be some who will brave even that void.”

And in a 1984 novel titled The Flight of the Dragonfly, science-fiction writer Robert L. Forward proposed using a light-sail propulsion system—pushed not by sunlight but by an Earth-based laser—to send a spaceship and a crew of 20 on a 40-year voyage to planets orbiting Barnard’s Star, 5.9 light-years away.

For now, travel to the stars, whether by light-sail or any other means, hasn’t progressed beyond science fiction. But we mustn’t forget how few years have passed since space travel itself was only a dream in the minds of authors like Jules Verne and Edgar Rice Burroughs. “Imagination,” wrote Albert Einstein, “is more important than knowledge.”

Set me on a course
That will beam me to a star,
O wild setting sun!
–Bob Eklund