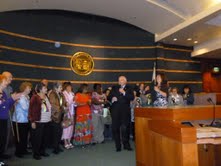 Jill Thomsen, Volunteer Specialist at the Culver City Senior Center, could finally exhale and enjoy a few moments of relaxation – or whatever passes for relaxation in her frequently frenetic schedule. It was the afternoon of Friday, April 26 of National Volunteer Week, which was established in 1974 as a time to celebrate people doing extraordinary things through service and focus attention on the impact and power of volunteerism.

The final event in the comprehensive agenda Thomsen had set up for the week had just successfully concluded. She had managed to pull off a coup she’d been planning for some time to celebrate and honor the volunteers of RSVP, in commemoration of its 40th anniversary in Culver City.

RSVP derives from a French phrase, “répondez s’il vous plaît.” It translates as “please reply” and is a fitting anagram for the Retired and Senior Volunteer Program, which invites seniors 55 and over to give back to their communities through service by using existing talents and skills or developing new ones. And approximately 500,000 volunteers across the country have accepted that invitation.

According to Thomsen’s records, there were over 400 Culver City RSVP members last year, compiling approximately 100,000 hours of service. That pencils out to a hefty amount, as the estimated hourly value of volunteer time in California was $24.75 in 2011 (state level data for 2012 has not yet been released by the government, which shows the estimated national value of volunteer time for 2012 as $22.14 per hour).

This year’s celebratory plans provided a unique challenge for Thomsen, who pulled out all the stops in arranging a truly memorable week for the RSVP volunteers.

“Usually I plan one event, such as a movie, but sometimes this conflicts with volunteers’ interests or schedules, as it can come on a day when they already are busy with volunteer assignments,” she said. “My goal this year – and the Department of Parks, Recreation & Community Services was so supportive of my ideas – was to make it very special, very big because of the 40th anniversary, with a different event every day at a different time of the day so there’d be something for everyone. That was my wish and it turned out to be true.”

And here’s how the week played out.

It kicked off at 7 P.M. on Monday, April 22 when several volunteers assembled at City Hall for Mayor Andy Weissman’s presentation of a commendation honoring RSVP’s 40th anniversary in Culver City. This was covered on local public access television, and photos were taken. Thomsen also presented the volunteers with colorful honoree pins commemorating the event.

A sumptuous breakfast at the senior center followed at 8 A.M. on Tuesday, April 23, catered by Culver City’s own Rutt’s Hawaiian Cafe. Dieting was not on anyone’s agenda as the volunteers happily consumed French toast, pancakes, eggs, bacon, turkey sausage and fruit. They were served by volunteers from the Culver Center Best Buy on Washington and also received a small gift.

The volunteers were invited to bring a guest along at 6 P.M. on Wednesday, April 24 for a movie to be screened that night at the senior center. An element of mystery was introduced as they got to choose the movie to be seen: Argo, Miss Congeniality, The Philadelphia Story or Back to the Future. And Argo got the nod. In addition, the attendees received a small gift, free popcorn, drinks and movie candy. Volunteers from the Culver City High School Dance Team were the concession servers.

At 1 P.M. on Thursday, April 25 the volunteers enjoyed BINGO! – and that exclamation mark is, if anything, an understatement – at the Doubletree Hotel in Culver City. The hotel had generously donated space for this event. There were free small treats and water available, and the prizes were received with glee and laughter. Volunteers from Banana Republic at The Grove were present to help out.

BINGO! was hosted by Legendary Bingo. Bingo Boy (Jeffery Bowman) was accompanied by the svelte, stunning and statuesque Roxy who added glamour and sass to the afternoon’s activities, guaranteeing that this was assuredly not your grandmother’s bingo (unless, that is, grandma was hip and open to a resoundingly good time). “We really enjoyed our time spent with these amazing volunteers,” said Bowman. “They have such spirit and really got into playing bingo the way we like to play it, which is ‘loudly!’”
In May of 2008 and in honor of Legendary Bingo’s tenth anniversary, the City of West Hollywood declared “Legendary Bingo Day” for the entire city. For more information about Legendary Bingo, see bingoboyinc.com.

Starting at 1 P.M. Friday, April 26 the volunteers got their party on at the senior center during an anniversary party that rocked, with cake, ice cream, candy, dancing, raffle prizes and a very special raffle for personalized on-site caricature portraits. Metro Cab donated the ice cream and the event was staffed by volunteers from Alpha Gamma Sigma Honor Society at Santa Monica College. There were even incredible, elaborate balloon party hats created on-site, and the image of volunteers line-dancing while sporting these amazing toppers is not one that will quickly fade.

Volunteers tend to share similar motivations, such as increased socialization and a desire to use their abilities to help others. Resi Kalmar, who attended the anniversary party, is one of them, and many can relate to her story. She belongs to the harmonica group that meets on Wednesdays at the senior center. Members of the group volunteer by performing at schools, hospitals, assisted living facilities, “anywhere we’re asked, and they are so grateful and want us to come back.”

A widow, she had been “living alone in a big house.” She came to Culver City and moved into Raintree, a community for which she has nothing but praise. But her beloved baby grand piano was a casualty of that move because of the logistics of transferring to multi-level housing.

“Without music I was miserable,” Kalmar said. “Then one day my son said he passed the senior center and heard music coming from it.” This was several years ago as the center was then in its former location adjacent to the Veterans Memorial Building. “After he heard the music he asked me to go and check this out, and to make him happy, I went,” she said. Upon finding the harmonica group she joined, although that instrument was new to her. “At that time I didn’t even know how to hold a harmonica,” she recalled. And as time passed and her proficiency grew, it evolved into a great source of pleasure for her and those whom she volunteers to entertain.

As the festivities wound to a close at the Friday party, Thomsen reflected that “it was fun having volunteers from other places interact with our volunteers, always good to have outside people involved. And every event was full! Everyone seemed happy and was complimentary, so I’m happy.” She found the volunteer spirit to be very strong because “some of the RSVP volunteers were trying to help with the cleanup after the events, but I wouldn’t let them. I liked seeing volunteers not have to work and be waited on, for a change!” She noted that “this senior center wouldn’t run as efficiently as it does on a daily basis without our wonderful volunteers.”

To Thomsen and to the members of Culver City RSVP, the volunteers she recruited to help during the events of National Volunteer Week and to volunteers everywhere, a huge “MERCI BIEN” for a job well done.