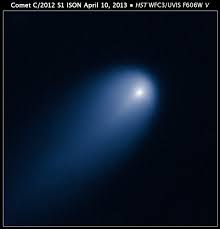 Scientists eagerly await the arrival of a recently discovered, highly active comet that will skim 730,000 miles above the Sun’s surface on Nov. 28 and has the potential to be readily visible from Earth.

The comet, C/2012 S1 (ISON), is highly unusual in that it comes to the inner solar system for the first time and will skirt around the Sun within less than two solar radii from its surface.

Comet C/ISON was discovered in September 2012 when it was farther away from the Sun than Jupiter, and was already active at such a great distance. This is distinct from most other sungrazers—comets that pass extremely close to the Sun—which are usually only discovered when they are already very near the Sun. At such a close perihelion distance from the Sun, sungrazers are expected to be intensely heated by the Sun, and sublimate not only ice but also silicates and even metals, releasing a tremendous amount of dust. The expectation is high that Comet C/ISON will be much brighter and more spectacular than most other sungrazers when it puts on a show late this year.

“As a first-time visitor to the inner solar system, Comet C/ISON provides astronomers a rare opportunity to study a fresh comet preserved since the formation of the solar system,” said Planetary Science Institute Research Scientist Jian-Yang Li, who led a team that imaged the comet. “The expected high brightness of the comet as it nears the Sun allows for many important measurements that are impossible for most other fresh comets.”

The team is using these images to measure the activity level of this comet and determine the size of the nucleus, in order to predict the comet’s activity when it passes perihelion, or closest to the Sun, later this year. Preliminary measurements from the Hubble images suggest that the nucleus, the solid, icy body at the center of the comet, is no larger than three or four miles across. This is remarkably small considering the high level of activity observed in the comet so far. This small size also means that the outcome from its close perihelion passage near the Sun is extremely hard to foresee.

The comet is active as sunlight warms the surface and causes frozen volatiles to sublimate. The comet’s dusty coma, or head of the comet, is currently approximately 3,100 miles across, or 1.2 times the width of Australia. A dust tail extends more than 57,000 miles, far beyond Hubble’s field of view.

A detailed analysis of the dust coma surrounding the nucleus reveals a strong jet blasting dust particles off the Sunward-facing side of the comet’s nucleus. This jet, as projected on the sky, extends at least 2,300 miles.

More careful analysis is currently under way to improve these measurements and to predict the possible outcome of the sungrazing perihelion passage of this comet.

Whether Comet C/ISON will become a “Comet of the Century” and outshine all other bright comets in the past still remains to be seen. But the new Hubble images of Comet C/ISON have revealed much valuable information about this highly unusual comet.