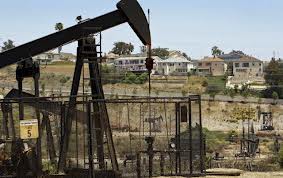 As the fracking industry sets its sights on major fracking expansion in California, the practice remains dangerously unregulated. Pressure is mounting on state legislators to take action. A number of fracking bills have been introduced in the Legislature and state regulators have proposed an overhaul of the state’s oil and gas regulations.

With Culver City’s proximity to the Inglewood Oil Field and the threat of  environmental devastation is not an alarmist rant- it’s a very real possibility. Our city on  has jurisdiction over a slender 10% of the oil field, and it is the state that will ultimately decide what happens no matter how we legislate for ourselves.

One of the best chances to protect Californians from fracking is AB 1301.1 Introduced by Assemblymember Richard Bloom, AB 1301 would impose an indefinite moratorium on fracking, protecting California’s water and air from this toxic practice.

“Assembly Member Bloom’s bill to protect our state from fracking pollution is supported by nurses, farmers and many other Californians,” said Rose Braz of the Center for Biological Diversity. “We’re working together to stop fracking from contaminating our air and water and causing irreversible damage to our state’s efforts to fight climate change.”

AB 1301 will face its first test next week, when it’s scheduled for a hearing and crucial vote in the Natural Resources Committee. We need to start putting pressure on lawmakers now to pass AB 1301.

Tell the California Legislature: Pass a moratorium on fracking.

States like Pennsylvania, Texas and Colorado allowed massive fracking booms to take place without evaluating the potential impacts of widespread fracking. As a result, they’re suffering: contaminated water, cancer-causing air pollution, endless diesel truck traffic, dangerous chemical spills, and vast quantities of toxic fracking waste that nobody is quite sure what to do with.

California has a historic opportunity to take a different path by placing a moratorium on fracking before widespread shale oil production begins. It simply makes no sense to jeopardize California’s precious water so that the fracking industry can make money selling more dirty oil.

But the fracking industry has deep pockets and plenty of influence in Sacramento, so it’s going to take sustained grassroots opposition to fracking in California to convince lawmakers to pass a moratorium.

Tell the California Legislature: Pass a moratorium on fracking.

You can read and track AB 1301 at OpenStates.org