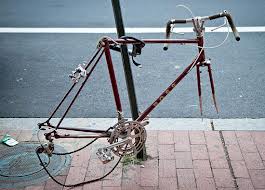 Crime Blotter for April 2nd through the 8th.

On April 2, 2013 at 5:00 pm, a victim called the police department to report graffiti to the rear of his building. The victim said he resides in the 5200 block of Kinston Avenue and when he checked the rear garage area he discovered unknown suspect(s) had painted his property.

On April 3, 2013 at 10:57 am, officers responded to the 5100 block of Purdue Avenue regarding a burglary investigation. The officers met with the victim who told them the following; she said she locked and secured her residence at 9:15 am and returned at 10:45 am. When she returned she noticed her rear door was open. The victim then checked the interior of her residence and discovered her property missing.

On April 4, 2013 at 5:25 pm, a victim came to the police department to report his bicycle had been stolen. The victim said he parked and locked his bike in the 4900 block of Overland Avenue at 12:00 pm and when he returned at 1:30 pm discovered his bike was missing.

On April 3, 2013 at 4:53 pm, officers responded to the 6000 block of Centinela Avenue regarding a car burglary investigation. The officers met with the victim who told them the following; she parked and locked her 2003 Acura at 2:50 pm and when she returned at 3:30 pm discovered her passenger window had been smashed out and her property missing.

On April 6, 2013 at 8:15 am, officers responded to the 9000 block of Washington Boulevard regarding a burglary investigation. The officers met with the reporting party who told the following; he said a co-worker locked and secured the location at 12:30 am. When he arrived at 7:45 am he discovered the safe was open and its contents missing.