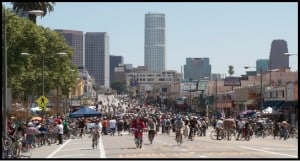 Los Angeles will celebrate its 6th CicLAvia on Sunday, April 21, and for the first time, the route will connect the city’s historic center at El Pueblo de Los Angeles in downtown and the bustling boardwalk of Venice Beach by way of Venice Boulevard, creating an unprecedented 15 miles of car-free space on City roads for strolling, biking, playing, and experiencing the city from a new perspective. The new route showcases the urban and natural beauty unique to Los Angeles, offering a rich tour of the city’s history, diverse neighborhoods, and majestic views of the Pacific Ocean.

At the perfect equidistant point between downtown and the beach; Culver City.

“CicLAvia’s success and the breakneck pace of bikeway construction demonstrate that
LA has removed its training wheels,” said Los Angeles Mayor Antonio Villaraigosa. “The synergy of public support and infrastructure investment has put LA at the front of the transit pack.”
Approved in March 2011, the Los Angeles  Master Bicycle Plan called for the creation of 1,680 miles
of new bicycle infrastructure by 2042, with an average 40 miles per year for the first five years.
LADOT exceeded expectations and built 123 new miles over the past two years.
“I am ecstatic that the City is continuing on a path to complete 40 miles of bike lanes per
year,” said Councilmember Bill Rosendahl. “We are seeing first-hand how the Master Bike Plan
is dramatically improving the City’s multi-modal system of transportation, as well as having a
positive impact on our air and climate.”

LADOT is building bikeways at a rate that is eight times faster than the previous 40 years. There are now a total of 431 miles of bikeways citywide, including 267 miles of bike lanes, 55 miles of bike paths, and 109 miles of bike routes.
“The City of Los Angeles is firmly committed to the ‘Complete Streets’ approach to urban planning,” said Councilmember José Huizar. “From parklets to bike corrals, from expanded pedestrian space to CicLAvia and 100-plus miles of bike lanes, we are, for the first time in years, prioritizing people over cars.”
The City has also installed over 5,000 bike racks, half of which have been installed  during the Mayor’s tenure. Over the next year, LADOT will further expand bike infrastructure with increased bike parking, additional bike lanes, a new bike path, and a bicycle-friendly 4th Street.
“Lack of infrastructure is the biggest barrier to more people choosing to ride. When the
City installs bike lanes, ridership goes up 100 to 200 percent within a year,” said Jen Klausner,
Executive Director of the Los Angeles County Bicycle Coalition. “We’re celebrating reaching a
milestone of 123 miles, but we’re really looking forward to the next 100 miles and a future
complete network. Mayor Villaraigosa has done so much to make Los Angeles a multimodal
city, and we’re excited to keep building on such amazing progress.”
The Mayor also announced that LA will celebrate its 6th CicLAvia on Sunday, April 21,
with its longest and most ambitious route to date. Spanning 15 miles, from El Pueblo to Venice
Beach, the new CicLAvia route will connect downtown and the Westside by way of Venice
Boulevard. The route will transform the often-congested thoroughfare into a car-free park for
strolling, biking, playing, and experiencing the city from a new perspective.
“Our goal is bring CicLAvia to as many different communities as possible, and to reach
all Angelenos regardless of where they live,” says Aaron Paley, Executive Director of CicLAvia.
“And once again, Mayor Villaraigosa’s leadership and support have made it possible for us to
realize our vision.”
The Mayor fought for additional funding to bring CicLAvia back three times in 2013:
April 21, June 23, and October 6.