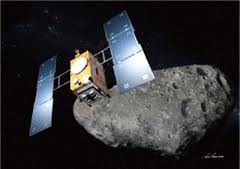 The Japan Aerospace Exploration Agency (JAXA) is scheduled to launch the asteroid explorer “Hayabusa2” on the H-IIA Launch Vehicle in 2014. The spacecraft will arrive at an asteroid in 2018 to investigate it for one and a half years—and to leave there a collection of messages from the general public—before returning to Earth in 2020.

JAXA will record and load names, messages and illustrations, from those wishing to participate, on the craft’s onboard devices—the target marker and the re-entry capsule. The target marker is a marking device that will be dispatched from Hayabusa2 when the spacecraft lands on the asteroid. The marker will remain on the asteroid after the craft’s re-entry capsule departs for its return to Earth.

The final stage of the Hayabusa2 mission will be a sample return. The craft will attempt to collect and bring back sand from the asteroid for study, with the goal of elucidating the origin and evolution of the solar system and learning more about the raw materials of life.

The asteroid probe “Hayabusa,” launched by JAXA in 2003, was a project designed to demonstrate various exploration technologies, looking toward the beginning of the age of round-trip exploration in the solar system. The chosen destination was “Itokawa,” an asteroid of only 500m diameter. Combining an Earth swingby and use of ion propulsion engines in a unique way for cruising, the probe reached this unexplored body and showed us a marvelous world beyond our imagination. Hayabusa provided the first close-up look at a Near Earth Object (NEO).

An improved version of the original Hayabusa probe, Hayabusa2 will visit a small asteroid whose orbit is similar to that of Itokawa, but whose composition is quite different. The target body of Hayabusa2 will be a C-type asteroid, considered to contain more organic or hydrated materials than S-type asteroids like Itokawa. What types of organic materials exist in the solar system, and is there any relation to life on Earth? The mission will challenge these questions.

The following details are provided for those interested in sending a message to the asteroid:
• Campaign name:
“Let’s meet with Le Petit Prince! Million Campaign 2”
• Campaign period:
From April 10 through July 16, 2013.
• Items you can send:
Names, messages, collection of messages, and illustrations, which will be recorded and loaded onto Hayabusa2.
• How you can apply:
Please refer to the following JAXA website:
www.jspec.jaxa.jp/e/hottopics/20130329.html

Incidentally, the phrase “Let’s meet with Le Petit Prince!” in the campaign’s name is derived from French author Antoine de Saint-Exupery’s classic story, Le Petit Prince (The Little Prince), in which the Prince is depicted as living on an asteroid.

For the Hayabusa2 project outline and mission overview, please refer to the following site: www.jaxa.jp/projects/sat/hayabusa2/index_e.html