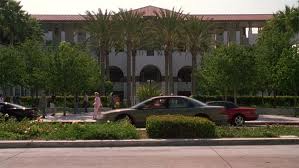 At Supervisor Mark Ridley-Thomas’ website, the topic of notable local architecture has come up, and it’s our turn -This month’s architectural focuses on Culver City to spotlight its striking city hall. Although the building itself does not have a specific architectural style, its red-tiled roof and bright off-white walls evoke a Mediterranean flair that speaks to Southern California’s easy-going lifestyle and pleasant weather while also maintaining a connection to its history. Located on the west end of downtown, the city’s 87,900 – square-foot headquarters do more than provide a home to the municipal administration, departments and meetings. It creates a visual sense of peace and order. Dactylifera palm trees line its walkway, creating a verdant traffic pattern that gently connects visitors to the water fountain along a patio plaza, and a courtyard and abundant open space shield visitors from the noisy traffic along Culver Boulevard.

The original city hall was built just as the movie industry was taking shape; it was by Orville L. Clark in 1928, also housed the police department and was reminiscent of the Beaux Arts style of architecture—albeit modestly—with a large pained oval window above its entrance. In 1995, in the middle of the city’s tremendously successful revitalization program, the city hall was rebuilt and updated to seismic code by architects, Armando Gonzalez and David Goodale of Gonzalez Goodale Architects. Gonzalez and Goodale included a remnant of the original 1928 building façade at its entrance, grounding Culver City firmly its past even as it looks to the future.

What do you think of Culver City City Hall? Go to ridley-thomas.lacounty.gov/Arts/index.php/architecture/ to vote or comment.