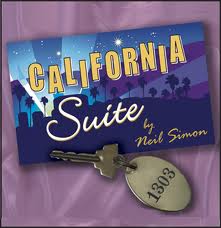 Kentwood Players announces auditions for Neil Simon’s comedy “California Suite” on Saturday, March 16 from 11:00am to 3:00pm and Sunday, March 17 from 6:00pm to 9:00pm at the Westchester Playhouse, located at 8301 Hindry Avenue in Westchester (LA 90045). If necessary, callbacks will be held on Monday, March 18. The production is directed by Alison Mattiza and produced by Larry Jones by special arrangement with Samuel French, Inc. Performances will take place from May 10 to June 15, 2013 on Fridays and Saturdays at 8:00pm and Sundays at 2:00pm at the Westchester Playhouse.

Neil Simon’s “California Suite” script combines typical Simon humor, sentimentality, and pace in ways that Hollywood (and audiences) often find hard to resist. The play premiered in 1976 at the Ahmanson Theatre in Los Angeles, and Simon was nominated for an Academy Award for the 1978 movie script based on his own play. The comedy is composed of four playlets that explore four separate human dramas to comical ends, all taking place in Suite 203-04 at the posh Beverly Hills Hotel which is celebrating its 100th anniversary this year.

In the Visitor from New York, divorced couple Bill and Hannah Warren have met in the suite in order to discuss who will get custody of their teenage daughter. In the Visitor from Philadelphia, Marvin Michaels tries frantically to explain the situation to his wife when she catches him in flagrante delicto with a hooker in their suite. In the Visitors from London, Sidney and Diana Nichols are a British couple who have rented the suite to prepare for the Academy Awards. The Visitors from Chicago are two affluent couples who are best friends and have come to Beverly Hills for a vacation which takes a turn for the worst after a mixed double tennis match.

Auditions will consist of cold readings from the script which will be provided at the auditions. Roles require excellent comedic timing and physical agility. Please bring your headshot, resume, and appointment calendar with you as the rehearsal schedule will be posted. Advance appointments are not necessary.