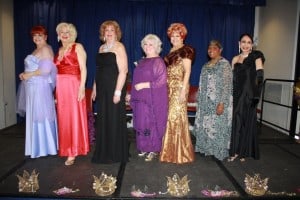 The one thing you can count on about time is that it does indeed march on. It can also strut, sashay and downright bedazzle, as was delightfully apparent on March 10 as seven contestants beguiled the audience while competing for the title of Ms. Senior Culver City 2013 at the Culver City Senior Center.

“This is the sixth year that the Culver City Senior Center has hosted this pageant,” said Debbie Cahill, the center’s Senior Program Specialist. As THE senior center for active older adults to meet, exercise, play, sing, dance, learn, volunteer, travel, create and celebrate life, it is the perfect match for us to host this pageant. The pageant is designed to promote the dignity and value of America’s seniors and it is a search for the gracious lady who best exemplifies the inner beauty of all senior Americans. It has been a pleasure and honor to be involved with this wonderful program. The best part of the program to me is seeing these beautiful, vibrant and talented ladies get to know each other and to have been told they are ‘bonded’ for life. Last year Syni, a Culver City 2010 queen, got married and a whole contingent of pageant participants went to her wedding on Catalina Island!”

Sunday’s event was the first of eight regional preliminary pageants scheduled throughout the state this year – and what a kickoff it was. The program theme was “Time to Shine” and the sparkle factor was set on high.

Cahill’s welcome to a packed house was followed by master of ceremonies Captain William Kohler, USMC retired, who led everyone in the pledge of allegiance, after which Elisabeth Howard, Ms. Senior America 2012, magnificently sang the national anthem.

The judges, who would have the enjoyable but difficult task of selecting a queen that afternoon, were then introduced: Lionel Crown, a board member at the center and previously in the aerospace industry; Amanda Secola, CEO/President, Senior Industry Professionals, Inc. and Editor/Publisher of Not Born Yesterday!; Bruce Popkin, president of the Culver City Exchange Club and former standup comedian and radio DJ; Ray Vida, retired from the airline industry and active in charitable events in Phoenix, AZ.; and Jan Owens, retired Director of Contracts of USAF and also previously with Boeing. Ed Harvey, who is retired from USAF and Boeing and had the responsibility of serving as timekeeper, was also introduced, as contestants have a strictly enforced time limitation within which to make their individual presentations.

The contestants, who must be at least 60 and American citizens, go through a judging process that is divided into four segments. The personal interview (30%), which took place before the doors opened to the public, had each contestant meeting with the panel to be evaluated on personality and interpersonal skills. The evening gown segment (20%) demonstrates poise, grace and stage presence. As the contestants share their philosophy of life (20%), the judges develop an insight into each woman’s personal inner beauty. Finally, the contestants have an opportunity to demonstrate that their unique gifts of talent (30%) are vital and undiminished by age.

After the judges were introduced Pageant Director Marilyn Kohler then took the stage as mistress of ceremonies. Cloaked in glitter, glamour and humor, she was living proof that elegance and fun can coexist very compatibly. Although she retired from her leadership role in the Ms. Senior California Pageant program, her future plans definitely do not include a rocking chair. This dynamic octogenarian is constantly busy scripting and directing shows, as she has her own senior performance group that entertains at various venues within and outside of California. She believes in “getting off the couch, getting on the road, singing, dancing, doing what we do.”

The contestants, to whom Kohler referred as “the magnificent seven” and who included a couple of great-grandmothers, consisted of Carol Hess, Aynne Louise, Judie McAskill, Joy Michaels, Mary Nelson, Genevieve De Pew and Marcia Zadian. They performed “Feelin’ Good,” a production number that had been choreographed by Syni Champion, Ms. Senior Culver City 2010. Their sensuous movements elicited whoops of approval from the audience and quickly caused cameras to appear. Brief self-introductions followed.

Pamela Wheeler, current chair of the Ms. Senior California Pageant, then spoke of the pageant’s vision and growth. The California chapter, formed in 1986, is now the largest senior pageant program in the nation. She looks forward to building upon the foundation Kohler created over the past 13 years, motivating not only senior women but baby boomer women to stay active and connected to life.

Kohler introduced the philosophy of life and formal attire segment, a segment that appealed on several levels as the beautifully garbed contestants expressed their thoughts. Hess focused on what a wonderful world this would be if everyone followed the golden rule. Louise spoke of the need to be a positive, loving and cheerful person to others, and the importance of giving them opportunities to fulfill their dreams. McAskill felt that life was a fresh canvas and we were the artists who can paint, every day, with respect, compassion and reverence. Another adherent to the golden rule was Michaels, who believes in getting up, putting on a happy face and helping people cope with whatever they’re experiencing. Nelson was a strong proponent of faith: faith in God, in others and in yourself. Being nice to others was the message lived by and endorsed by De Pew. Zadian spoke of the importance of believing in herself and making her dreams come true, making her performance in life a great one, and integrating weight control and nutrition into her life.

The Eternells, Dorcas Preston, Pamela Wheeler and Norma Morein, all former state queens, provided a highly entertaining musical interlude with their performance of “Putting on the Ritz.”

Wendy Ida, Ms. Senior Culver City 2012, then shared her philosophy, one to which she is a trim and toned shining testament. This award-winning bodybuilder and author of “Take Back Your Life” told of how “women have always taken care of others while often neglecting themselves. Now is the time to take back your life, take control, and recapture body, health and youth right now.” She shared that she had been a victim of domestic violence for 13 years, fleeing with two young children with only the clothes on their backs. She told of having lost 80 pounds and of being happily married now for 23 years to a husband who is her biggest supporter.

“First, you have to determine what taking control of your life means to you,” Ida emphasized. “Second, determine how bad you want it. And third, shift into gear and take action. That requires having courage, having a plan of action and persisting. I’m happy to see these women are ready for their dreams.”

The talent presentations that were introduced by Kohler followed Ida’s stirring remarks included vocalists, dancers, a musician and an artist.

Hess belted out a rousing version of “Don’t Rain on My Parade.” Louise entranced the audience by singing “If I Could Tell You.” McAskill displayed six of her stunning paintings as she told of the magical mystical journey into a life of passion and metamorphosis that they represented. Michaels performed “Rainbow” on her washboard, bringing forth unique and wonderful sounds. Nelson offered a passionate and heartfelt interpretation of “Unchained Melody.” Whitney Houston’s “I Love the Lord” was the inspiration for De Pew’s moving interpretive dance presentation. And Zadian danced with verve and delight to “Como Esta Usted,” a south of the border song that had been written for Annette Funicello.
Another musical interlude followed, with crowd-pleasing performances by three California queens. Dr. Klyda Mahoney, Ms. Senior California 2002, soulfully sang “After You’re Gone.” Peggy Padilla, Ms. Senior California 2009, tore up the stage tap-dancing to “12th Street Rag.” Elisabeth Howard, the reigning Ms. Senior California, sang “Juliette’s Waltz,” displaying the magnificent voice that helped her win Ms. Senior America 2012.
Prior to the raffle in which she and former queens participated, Howard, who is on the vocal faculty of Pepperdine University and is the founder and director of the Vocal Power Academy in Los Angeles, shared that her entire life was about teaching others to put their best foot forward, and through the pageant she had learned to put hers forward as well. “Don’t wait for tomorrow, it’s today that counts,” she exhorted the audience. “It’s been a fantastic experience,” she added, thanking the Kohlers and others in the pageant “for giving me the courage to be who I am today.”

The moment had come, as the contestants returned to the stage for the presentation of the finalists. Hess received trophies as talent winner and as second runner up. First runner up went to Nelson. And Zadian became Ms. Senior Culver City 2013 as the Queen’s Walk theme song was performed by Queen Dorcas Preston, Ms. Senior California and Ms. Senior America 2001.

In a quick on-stage interview amidst cameras, hugs and congratulations, Zadian, a striking, shapely woman, shared that she had lost 60 pounds 40 years ago. Her message was to “get off the couch, step out of the sidelines.” Five years ago at age 65 she took dance lessons, as was evident from her performance. “This is a time to get out and do,” she emphasized. “Depression can set in as you grow older. Many senior centers offer dance lessons and a variety of classes, so there’s no need to sit at home. Be visible, not invisible!”

We’ve all heard the expression, “A meal without wine is like a day without sunshine.” Some would concur; some would not. But it’s a pretty safe bet that all of the women connected to this pageant would agree that a heart without joie de vivre is like a day without sunshine. When it comes to joy, these ladies embrace it, bring it and embody it. They certainly lit up the first day of Daylight Saving Time with sunshine to spare.