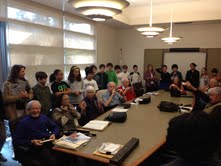 In 1966 during the era of Apartheid, Robert F. Kennedy gave a talk to South African students at the University of Cape Town that included this quote: “Few are willing to brave the disapproval of their fellows, the censure of their colleagues, the wrath of their society. Moral courage is a rarer commodity than bravery in battle or great intelligence. Yet it is the one essential, vital quality for those who seek to change a world that yields most painfully to change.”

As I awaited the arrival of the Turning Point students at the Culver City Senior Center on Feb. 6 I wondered what messages would be communicated in their homework assignment, which was to write an advisory poem regarding the importance of moral courage or when it should be shown. How well would the minds of Level 6 students filter these concepts?

Admirably, as it turned out.

But I had to wait. Before we split up into our table groups Jill Thomsen, the center’s Volunteer Specialist, took the students on a quick tour, an appropriate quid pro quo as our previous meeting had taken place at the school, a site that had greatly impressed the senior volunteers. Because time was so short, Jill could only include three areas of our very active center, and I hope before this year’s sessions end in early March she will be able to sneak in an additional tour, for I could see that the students were intrigued.

She first took us to the harmonica class, where we were treated to “Puff, the Magic Dragon.” Next stop was the poolroom and I was surprised by the large affirmative response when the students were asked how many had played this game. Our final stop was the room where the volunteer crochet group was meeting and, not surprisingly, their work brought forth several oohs and aahs.

Then it was time to get down to business and start sharing our homework assignment. There was no question in my mind, as I listened to the students’ poems, that this group really got it. And I could see traces of their personalities in their words and writing style.

“ . . . Sitting on wood writing with a broken lonely heart/I am DONE/Standing on wood, as tall as a building/Having moral courage, speaking what I can/My shutters open, I feel as if the river had never existed/I did it/I am the elephant, no longer the ant/I had moral courage/I AM THE ELEPHANT.”

“ . . . Standing up for a friend/Doing things people said you couldn’t/Showing that you can/Letting others know you are there/Doing something to help/Making you move forward/To stand up for you and others . . . “

“In my mind/Moral courage is self-expression/In my mind/How you express it is a choice/A choice in which one decides to step up or step down . . . “

I cited Malala Yousafzai, the Pakistani teenager who was targeted by the Taliban because of her desire to promote education for girls. Now recovering in England from gunshots to her head and neck, she remains determined to carry on her mission.

Miriam, my fellow volunteer, shared a poem called “Shame” that she’d come across in an arthritis publication. The writer, now in college, was Maggie Yaddof, who learned, at the age of 16, that the restrictive pain invading her body was due to juvenile arthritis. She started writing poems about living with this disease, poems that have inspired and given courage to others similarly affected.

“It takes moral courage to share with the world something you’re ashamed of,” Miriam said. “It shows that you care, and that is the basis of all kindness.”

Lyrical, terse, emphatic – however they chose to convey their thoughts, the students’ messages were clear. You encounter internal conflict when friends act badly. Your decisions may not always be the popular ones. Know that you have choices, and your heart will tell you the right choice to make. You have responsibilities to others and to yourself. Speak the truth. Actions have repercussions.

What I wouldn’t give to be a fly on the wall when they have their mentoring session with their Level 3 mentees . . .

The students’ clarity, their grasp of the subject, their downright determination to stand up for themselves and others, to take risks, to search their souls and do that sometimes elusive and controversial “right thing” was impressive. And I can think of quite a few adults in government and private industry who would have flunked this assignment.

Our hour was almost up, and teacher Diana Bender segued into our next homework assignment by offering a quote attributed to Cicero, a Roman senator some 2,000 plus years ago: “Within the character of the citizen lies the welfare of the nation.”

She asked what we thought that meant. “What’s an anthill without ants?” was one student’s response. “A person can do only so much but if others join in more can be accomplished,” said another. And one observed that “a community is more powerful than the person who runs it.”

Our homework assignment for Feb. 13 is to determine in what areas of our local community we would like to see change that will benefit future generations, and to compose a letter to a local paper or politician with the goal of adding to the community’s welfare through such change. I’m eager to hear the thoughts of these students because, young as they are, I feel they’re already committed to making a difference and I’m curious to get a preview of the future they’d want to create after our recent focus on kindness and moral courage.

I know the future I’d want to create is one in which the folks in government and private industry I alluded to would be required to focus regularly on those concepts, but I’m not holding my breath. With these students, however, I can see my hope quotient rising.