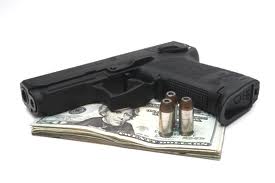 While some may argue that it’s better than an empty building, the opening of the Dollar Loan Center store on Sepulveda seems to add another portion of trouble for Sunkist Park. The strip of Sepulveda that already features two of the skankiest bars imaginable, a series of drive-through fast food spots. a gun shop, and an open-during-the-rush tax prep office could hardly sink lower. A credit-squeeze instant loan owned by a man who keeps getting arrested is another weight dragging the boulevard down. It’s not just about ugly; it’s about dangerous.

In a city where billboards are illegal, there are dancing sign holders at almost every corner for several blocks touting cell phones, credit dentists, and other bottom rung business offers, creating an atmosphere of economic desperation and visual sleaze.

The Dollar Loan Center, which offers “Don’t Be Broke” as it’s slogan, gives it’s patrons the other option of getting into insane amounts of debt very quickly. With a $2,500 loan available at a charge of $13.53 interest (compounded daily) that’s $ 2,909.50 you need to pay back at the end of the month. Advertisements for the DLC  note that “Anyone can apply, but we normally require a minimum household income of $4000 per month for approval.” So, the employees of the fast food restaurants and the credit dentist don’t really qualify. Who is this business looking to serve ?

According to the Associated Press, Charles Brennan, founder and owner of Dollar Loan Center stores in Nevada, Utah and South Dakota, has been arrested in a prostitution sting and was also charged with a campaign finance violation.

Brennan, 42, of Las Vegas, was booked into the Washington County jail on a misdemeanor charge of patronizing a prostitute on January 16 of this year.

The Sioux Falls, S.D., native and the others are accused of offering money to a decoy acting as a prostitute in exchange for sexual favors. Police spokesman Johnny Heppler said detectives arranged the sting at a local hotel by posting an ad on a website primarily used by men seeking prostitutes. “They (suspects) then took the additional step by meeting with the decoy and exchanging money, at which point they were arrested,” he said.

The Culver City Planning Commission has made it clear that they do not have any control over what kind of businesses Culver City can accept. But can we take a moment to notice that the instant loan, easy walking distance from the bars and the gun shop, is also with in very close proximity to two of our elementary schools ?

There is just one thing missing at this point – an angry, mentally ill man who can get some money, drink until he’s angrier, buy a gun and walk to school.

An empty building is not the worst thing to have.