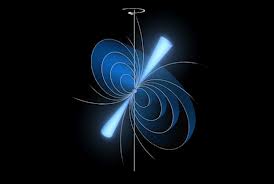 An international team led by Dutch astronomers has made a tantalizing discovery about the way pulsars emit radiation. The emission of X-rays and radio waves by these pulsating neutron stars is able to change dramatically in seconds, simultaneously, in a way that cannot be explained with current theory. The research results appeared in the journal Science on 25 January.

Pulsars are small spinning stars that are only about a dozen miles in diameter—the size of a small city—but which weigh as much as our Sun. These super-dense objects have a strong magnetic field that is approximately one million times stronger than the fields scientists can make in laboratories on Earth. The pulsar emits a beam of radiation. As the star spins—typically several times per second—the radio beam sweeps repeatedly over Earth, and we detect short pulses of radiation, a bit like a lighthouse. Some pulsars emit radiation across the entire electromagnetic spectrum, including both X-ray and radio wavelengths.

It has been known for some time that some radio pulsars flip their behavior between two (or even more) states, changing the pattern and intensity of their radio pulses. The moment of flip is both unpredictable and sudden (often within a single rotation period).

The scientists studied a particular pulsar called PSR B0943+10, one of the first pulsars discovered. The pulses from PSR B0943+10 change in form and brightness every few hours, and these changes happen within about a second. It is as if the pulsar has two distinct personalities. As PSR B0943+10 is one of the few pulsars also known to emit X-ray radiation, knowing how this pulsar behaved in X-rays during the ‘radio changes’ could provide new insight into the nature of the emission process.

Since the source is a weak X-ray emitter, the team used the most sensitive X-ray telescope in operation, the ESA-funded XMM-Newton. The observations took place over six separate sessions of about six hours in duration. To identify the exact flips in the pulsar’s radio behavior the X-ray observations were tracked simultaneously with two of the most powerful radio telescopes in the world, GMRT and LOFAR.

The results were surprising. The X-rays did indeed change their behavior synchronously with the radio emission, as might have been expected. But in the state where the radio signal is strong and the pulses are clear, the X-rays were weak. And when the radio emission switched to weak the X-rays intensified.

The discovery of the first pulsar makes for an interesting story. In 1967 Jocelyn Bell, a graduate student at Cambridge University, was analyzing data from the university’s radio telescope and came across radio signals that were faster (many pulses per second) and more regular than anything ever before observed. At first there was speculation that these might be signals from extraterrestrials (“Little Green Men”), but as she and her associates studied earlier theoretical papers they determined that these signals must come from rapidly spinning, super-dense collapsed stars—which had been theorized but never observed.

In 1974, Antony Hewish, Bell’s thesis advisor, was awarded the Nobel Prize in Physics “for his decisive role in the discovery of pulsars” without Jocelyn Bell being named as a co-recipient—even though Bell had been the first to observe the pulsar.