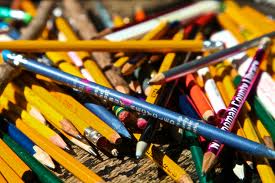 One thing about growing older that many seniors will regretfully agree upon is that time really seems to zip by at rocket speed. However, the upside is that this helped keep me from impatiently perceiving the period following the conclusion of last year’s Intergenerational Writing Project as an interminable abyss separating me from a greatly longed for experience. Almost before I could bemoan the project’s departure it returned, and I couldn’t be more pleased.

Why? Because I am again part of that stimulating creative adventure connecting senior volunteers recruited by the Culver City Parks, Recreation and Community Services Department’s innovative Volunteer Specialist, Jill Thomsen, who played a key role in facilitating the initial collaboration in 2010, and the Level Six (sixth grade) students from Turning Point School, a private school in Culver City that infuses its curriculum with imagination.

Thanks to Jill’s efforts to enhance opportunities for volunteers to have an array of rewarding experiences, I’ve participated as a senior volunteer since the project’s inception, eagerly anticipating this year’s sessions which launched on Wednesday, Jan. 23 at the Culver City Senior Center. Remaining sessions are scheduled for Jan. 30, Feb. 6, Feb. 13, Feb. 27 and March 6, with the Jan. 30 and Feb. 27 sessions to be held at the school.

Prior to the first session the students and the nine volunteers (myself, Ilene Cohen, Lillian June Davis, Esther Ekmanian, Alice Jackson, Janet Rohrbacher, Marilyn Russell, Miriam Schnepp and Barbara Spielberg) were notified of the first assignment so we could hit the ground running at our morning meeting. To help us get to know one another we were asked to choose three important events from our life and illustrate each by bringing a photo or other visual depiction representing a moment before, after or during the event. We were also to describe each event in six words, the text to be separate from the photo.

I had to smile when I read about the six-word description, as that can be traced back to a suggestion I made at the conclusion of last year’s project. I’d heard that Ernest: Hemingway once wrote a story in just six words (“For sale: baby shoes, never worn.”), so I thought it might be a fun exercise in concise expression to perform at some future date – and my suggestion was implemented!

At our first session we were divided into separate table groups. My table had Diana Bender, the teacher with whom I’d had the pleasure of sitting last year, and Miriam Schnepp, a senior volunteer who is a former teacher and prolific poet. Completing our table were nine bright, engaged students: Emi, Emma, Madison, Vanessa, Lauren, Matthew, Dean, Luke and Gavin.

We passed the photos around without the texts and had the group share what we had learned about the person from the images, which mostly involved sports, travel, friends and family. Then the presenters shared their six-word descriptions.

Diana mentioned that in order to enhance their ability to pick up on visual clues, prior to the first session the students had read a book called “The Arrival” that told a story through pictures. It apparently did the job, because they commented on several details in the photos that had eluded me.

I was intrigued enough to do some research about the book and learned that it is a highly imaginative and powerful graphic novel in which the author, Shaun Tan, depicts the journey of one man to a new country and captures the displacement, disorientation and wonder with which immigrants respond to their new surroundings.

As the theme this year focuses on core values that integrate concepts of kindness, moral courage, citizenship and peace, we then read Aesop’s fable, “The Lion and the Mouse,” in which a lion spares the life of a mouse and in turn is saved by the mouse after being captured. A lively discussion regarding the concept of kindness followed, including examples of kind acts we had performed or experienced. Miriam brought up the movie, “Pass it Forward,” which described the creation of a culture of kindness. Diana then discussed our homework assignment, which is to write our own one-sentence adage demonstrating the importance of kindness as well as a short fable, eight to ten sentences, illustrating that adage.

As a special treat Ilene Cohen, one of the volunteers who is also a puppeteer, provided a marvelous ending to our first session by presenting a highly entertaining puppet show depicting the fable we had just read.

I just finished my homework, so next Wednesday can’t come soon enough for this senior. Stay tuned . . .