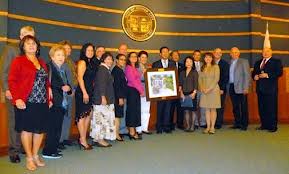 It was a sold out crowd at the Courtyard by Marriott last week when the Culver City Sister City Committee celebrated its 50th Anniversary in grand, international style.
Barbara Honig, Vice President and 50th Anniversary Chair and CCSC President Marla Wolkowitz spearheaded a committee dedicated to making the celebration a memorable one for all in attendance, and their success is to be applauded.
In addition to the number of CCSC members and guests and city officials who were present was Sister City Charter Member Bill Douglas, the Honorable David Figueroa Ortega, Consul General of Mexico, Honorable Jun Niimi, Consul General of Japan, the Honorable Yeong-Sun Shin, Consul General of Korea, David Fransen, Consul General of Canada, Mayor Rjoko Dudic, Lethbridge, Alberta, Canada, and Sister Cities International board representative Bill Boerum.
Traditional music, dance (and menu items) were presented representing each of the Sister City participants, beginning with the first, Uruapan, Mexico (established in 1964); Kaizuka, Osaka, Japan (1965); Iksan City, So. Korea (1983); and Lethbridge, Alberta, Canada (1989).
Over the years the Culver City Sister City Committee has facilitated numerous adult and student exchange programs and celebrations, enthusiastically received by those both hosting and traveling. Those interested in joining the CCSC can find out more by visiting www.culvercitysistercitycommittee.org.