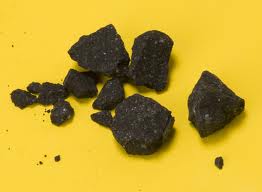 NASA RESEARCHERS STRIKE SCIENTIFIC GOLD WITH METEORITE – Scientists found treasure when they studied a meteorite that was recovered April 22, 2012, at Sutter’s Mill near Coloma, Calif., the gold discovery site that led to the 1849 California Gold Rush. Detection of the falling meteorites by Doppler weather radar allowed for rapid recovery so that scientists could study for the first time a primitive meteorite that had little exposure to the elements—providing the most pristine look yet at the surface of primitive asteroids.

An international team of 70 researchers reported their findings in the Dec. 20 issue of Science magazine [http://www.sciencemag.org/content/338/6114/1583.abstract].

“The small three-meter-sized asteroid that impacted over California’s Sierra Nevada came in at twice the speed of typical meteorite falls,” said lead author and meteor astronomer Peter Jenniskens of the SETI Institute, Mountain View, Calif., and NASA’s Ames Research Center, Moffett Field, Calif. “Clocked at 64,000 miles per hour, it was the biggest impact over land since the impact of the four-meter-sized asteroid 2008 TC3, four years ago over Sudan.”

The Sutter’s Mill meteorite fall occurred just before 8 a.m. April 22 as an uncommon daytime fireball. It passed south of Reno, Nev., headed west, and was seen across Nevada and California. Residents around Coloma, Calif., reported hearing a “scary” loud sonic boom that shook their houses.

These are signatures of a meteorite fall, and there was immediate interest in finding the site where any meteorites would have landed. Traditional meteorite recovery based on eyewitness accounts, however, is a tedious and uncertain process. The American Meteor Society estimates that one meteorite fall occurs every day somewhere on Earth, and yet the Meteoritical Society typically records only about 10 new meteorite falls worldwide each year. Meteorite falls are fairly common, but meteorite recoveries are a rare event.

A new tool is improving those odds. Weather radars operated by the National Weather Service continually scan the skies over the United States, and the researchers realized that any meteorites that fall in the U.S. could be detected on radar. Sure enough, weather radars not only recorded the Sutter’s Mill fall, but actually presented that data while the fall was still in progress.

After the asteroid broke up in the atmosphere, weather radar briefly detected a hailstorm of falling meteorites over the townships of Coloma and Lotus in California. This enabled a rapid recovery that permitted the most pristine look yet at a CM-type carbonaceous chondrite.

Of the original asteroid, estimated to have weighed 100,000 pounds, less than two pounds was recovered on the ground—in the form of 77 meteorites. The biggest of these weighed 205 grams. Some of the key meteorites discussed in this work were found by volunteer search teams led by Jenniskens.

“The meteorite was a jumbled mess of rocks, called a regolith breccias, that originated from near the surface of a primitive asteroid,” said meteoriticist Derek Sears of NASA Ames. NASA and the Japanese space agency (JAXA) have plans to send space probes to asteroids similar to the one recovered at Sutter’s Mill. The Sutter’s Mill meteorite provides a rare glimpse of what these space missions may find.

Because of the rapid recovery of the Sutter’s Mill meteorite, many carbon-containing compounds were detected in their pristine condition—compounds that would have quickly reacted with water once in the Earth’s environment. It is thought that the carbon atoms in our bodies may have been brought to Earth by such primitive asteroids in the early stages of our planet’s history.

“Only 150 parts per billion of the Sutter’s Mill meteorite was actual gold,” said co-author and cosmochemist Qing-zhu Yin of UC Davis, Davis, Calif., “but all of it was scientific gold. With 78 other elements measured, Sutter’s Mill provides one of the most complete records of elemental compositions documented for such primitive meteorites.”