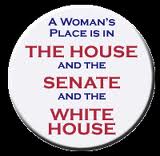 Where have all the women gone? asks Scott Lay of the Sacramento-watching website The Nooner; Last Friday, the field was set in the Los Angeles mayor, city attorney, controller, and 8 city council races. Out of 57 candidates for the 11 offices, there are only 10 female candidates.

The elections, which occur on March 5 with May 7 runoffs in races in which a candidate does not exceed 50%, may indeed be historic. City Controller Wendy Greuel is in a strong position to become the first woman mayor of the City of Angels, although the threats of a large independent expenditure on behalf of Kevin James, combined with low turnout, could allow the conservative a serious shot at the office. Men are expected to win the city attorney and city controller positions.

While advocates of women for office might be celebrating the top spot, however, there is a much dimmer outlook for women on the city council. There has been at least one woman continuously on the Los Angeles City Council since Pat Russell’s election in 1969. Russell was the fourth woman elected to the council and the first to be elected president. In the late 1990s, there was a high of five female councilmembers.

Currently, there is one female–Jan Perry, who is leaving because of term limits and running for mayor. Of the eight council races, four have zero women, two have two women, and two have one woman.

Only in one district–CD9–is a female candidate considered well funded and competitive with the other top candidates in the race. Ana Cubas is running for the district that stretches from L.A. Live (Staples) down to South Los Angeles and includes USC. It is historically an area that has sent African-Americans to the council, and Jan Perry currently represents the area. Cubas, chief of staff to Councilmember Jose Huizar and a former staff member at the Legislative Analyst’s Office, faces six other candidates, including Assemblymember Mike Davis and State Senator Curren Price, Jr.

The district has seen a significant demographic shift with a rapidly growing Latino population and now is about 70% Latino. Correspondingly, the black Citizen Voting Age Population has shrunk, representing 18%. However, particularly in the low-turnout Los Angeles odd-year elections (only 14% turnout in 2011’s March primary), African-American political and religious groups still wield tremendous organizational strength. Given this and Davis’s slower start, Price is currently seen as the favorite.

Gender is unlikely to be an issue in the CD9 race, and this is an area of highly racially polarized voting. At the end of the day, this district will likely see a May runoff, and who makes it in and who prevails will largely be a function of grassroots organization and turnout.