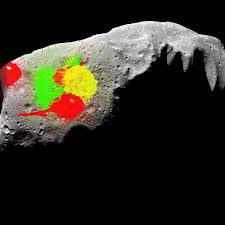 PAINTBALLS MAY DEFLECT AN INCOMING ASTEROID – In the event that a giant asteroid is headed toward Earth, it might help if it were blindingly white. A white asteroid would reflect sunlight—and over time, this bouncing of photons off its surface could create enough of a force to push the asteroid off its course.

How might one encourage such a deflection? One answer, according to an MIT graduate student: with a volley or two of space-launched paintballs.

Sung Wook Paek, a graduate student in MIT’s Department of Aeronautics and Astronautics, says that if timed just right, pellets full of paint powder, launched in two rounds from a spacecraft at relatively close distance, would cover the front and back of an asteroid, more than doubling its reflectivity, or albedo. The initial force from the pellets would bump the asteroid off course; over time, the Sun’s photons would deflect it even more. From his calculations, Paek estimates that it would take up to 20 years for the cumulative effect of solar radiation pressure to successfully push the asteroid off its Earth-bound trajectory.

The challenge put forth by this year’s U.N. competition was to identify novel solutions for safely deflecting a near-Earth object, such as an asteroid. Scientists have proposed a wide variety of methods to avoid an asteroid collision. Some proposals launch a projectile or spacecraft to collide with an incoming asteroid; the European Space Agency is currently investigating such a mission. Other methods have included detonating a nuclear bomb near an asteroid or equipping spacecraft as “gravity tractors,” using a craft’s gravitational field to pull an asteroid off its path.

ASTEROID TO COME WITHIN 14,000 MILES NEXT FEBRUARY

International leaders in asteroid and comet research are gathering at the University of Central Florida in Orlando on Feb. 15, 2013, for a special “viewing party” that will climax with asteroid 2012 DA14 passing between Earth and orbiting communication satellites (within 14,000 miles of Earth).

The asteroid, the size of a city block, will squeeze by Earth’s atmosphere and the geostationary satellites orbiting the planet. It will be the closest flyby in history. Animation: http://www.youtube.com/watch?v=S7YTmS6U8WM

Experts say there is no chance the asteroid will hit Earth—this time. But with more than 4,700 asteroids NASA has identified as potential threats to Earth, some as big as 16 football fields, these objects are getting a lot of attention.

Should an asteroid be detected on a collision course with Earth, it will be critical to know its composition and structure in order to deflect it. The impact of a small asteroid like DA14 would equal the destructive power of an atomic bomb. A larger asteroid could be catastrophic.

That’s why the planetary scientists at UCF organized this free viewing party and invited leaders in asteroid research to speak to the public about the reality and myths of these ancient rocks on Feb. 15. UCF and the Florida Space Institute are sponsoring this event.

The public also will get a chance to see the flyby through exclusive live feeds from telescopes in La Sagra and Tenerife, Spain, where the astronomers who first discovered DA14 will be tracking it.