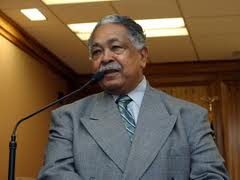 Gov. Jerry Brown and dozens of other prominent officials are scheduled to attend the Holy Cross funeral of trail-blazing leader Mervyn Dymally, who in a four-decade career served in every corner of California government and eventually became the state’s highest-ranking black politician.

Attorney General Kamala Harris, Los Angeles mayor Antonio Villaraigosa and legislative and congressional leaders from past and present are also set to attend Wednesday’s services in at Holy Cross followed by a larger public memorial at an Inglewood church.

According to the Associated Press, Dymally died Sunday in Los Angeles at age 86 after a period of declining health.

Born in Trinidad, he became California’s first black state senator in 1966, its first and only black lieutenant governor in 1974 and won a congressional seat in 1980, representing a heavily Democratic district in the Compton area.

He retired from the House of Representatives in 1993, but at age 76 returned to the California legislature in 2002, winning the same Assembly seat where he’d started his career four decades earlier and serving six more years.

But scandal followed success throughout Dymally’s career, including numerous allegations of fraud, bribery and pay-for-play campaign contributions. He maintained that he never acted illegally and said in a 1976 op-ed piece that he had been the victim of “sustained harassment and distortion.”