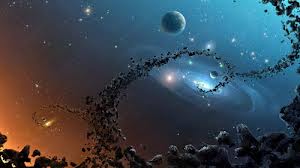 UCLA ASTRONOMERS REPORT THE DISCOVERY of a remarkable star that orbits the enormous black hole at the center of our Milky Way galaxy in a blistering 11-and-a-half years—the shortest known orbit of any star near this black hole.

The star, known as S0-102, may help astronomers discover whether Albert Einstein was right in his fundamental prediction of how black holes warp space and time, said research co-author Andrea Ghez, leader of the discovery team and a UCLA professor of physics and astronomy. The research was published Oct. 5 in the journal Science.

Before this discovery, astronomers knew of only one star with a very short orbit near the black hole: S0-2, which Ghez used to call her “favorite star” and whose orbit is 16 years. (The “S” is for Sagittarius, the constellation containing the galactic center and the black hole.)

“I’m extremely pleased to find two stars that orbit our galaxy’s supermassive black hole in much less than a human lifetime,” said Ghez, who studies 3,000 stars that orbit the black hole, and has been studying S0-2 since 1995. Most of the stars have orbits of 60 years or longer, she said.

“It is the tango of S0-102 and S0-2 that will reveal the true geometry of space and time near a black hole for the first time,” Ghez said. “This measurement cannot be done with one star alone.”

Over the past 17 years, Ghez and colleagues have used the W. M. Keck Observatory, which sits atop Hawaii’s dormant Mauna Kea volcano, to image the galactic center at the highest angular resolution possible. They use a powerful technology called adaptive optics to correct the distorting effects of the Earth’s atmosphere.

Black holes, which form out of the collapse of matter, have such high density that nothing can escape their gravitational pull—not even light. They cannot be seen directly, but their influence on nearby stars is visible and provides a signature, said Ghez.

Einstein’s theory of general relativity predicts that mass distorts space and time and therefore not only slows down the flow of time but also stretches or shrinks distances.

“The fact that we can find stars that are so close to the black hole is phenomenal,” said Ghez, who directs the UCLA Galactic Center Group. “Now it’s a whole new ballgame, in terms of the kinds of experiments we can do to understand how black holes grow over time, the role supermassive black holes play in the center of galaxies, and whether Einstein’s theory of general relativity is valid near a black hole, where this theory has never been tested before.”

“The exciting thing about seeing stars go through their complete orbit is not only that you can prove that a black hole exists but you have the first opportunity to test fundamental physics using the motions of these stars,” Ghez said. “Showing that it goes around in an ellipse provides the mass of the supermassive black hole, but if we can improve the precision of the measurements, we can see deviations from a perfect ellipse—which is the signature of general relativity.”

As the stars come to their closest approach to the black hole, their motion will be affected by the curvature of space-time, and the light traveling from the stars to us will be distorted, Ghez explained.