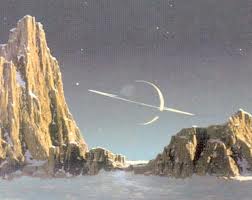 NAVIGATING THE SEAS OF TITAN – Humanity has landed rovers on Mars. Now, say scientists, it’s time to land a boat on Titan. This outlandish scenario could become reality, according to engineers presenting their proposals at the European Planetary Science Congress on September 27.

Titan, Saturn’s largest moon, is one of the most Earth-like bodies in the solar system. With a thick atmosphere, a diameter between that of Earth and of planet Mercury, and a network of seas, lakes and rivers, it is in many respects more like a planet than a moon like the Earth’s.

The Cassini-Huygens mission, which has studied Titan extensively, confirmed that lakes, seas and rivers of liquid hydrocarbons (similar to household gas) exist, covering much of the satellite’s northern hemisphere. Although the Huygens probe eventually landed on solid ground, it was designed to be able to float for a short period.

The new plan, called the Titan Lake In-situ Sampling Propelled Explorer (TALISE), proposes a boat-probe that would be propelled by wheels, paddles or screws. The probe would land in the middle of Ligeia Mare (the biggest lake, near Titan’s north pole), then set sail for the coast, taking scientific measurements along the way. The mission would last around six months to a year.

“The main innovation in TALISE is the propulsion system,” says Igone Urdampilleta, a member of the TALISE team. “This allows the probe to move, under control, from the landing site in the lake, to the closest shore. The displacement capability would achieve the obtaining of liquid and solid samples from several scientific interesting locations on Titan’s surface such as the landing place, along the route towards the shore and finally at the shoreline.”

Titan’s environment is too cold for life as we know it, but its environment, rich in the building blocks of life, is of great interest to astrobiologists. The satellite’s atmosphere is made up largely of nitrogen (like Earth’s), and is rich in organic compounds and hydrogen cyanide, which may have played a role in the emergence of life on Earth.

Detailed observations of Titan have now spanned 30 years, covering an entire solar orbit for this distant world. Dr. Athena Coustenis from the Paris-Meudon Observatory in France has analyzed data gathered over this time and has found that the changing seasons of Titan affect it more than previously thought.

Coustenis explains, “As with Earth, conditions on Titan change with its seasons. We can see differences in atmospheric temperatures, chemical composition and circulation patterns, especially at the poles. For example, hydrocarbon lakes form around the north polar region during winter due to colder temperatures and condensation. Also, a haze layer surrounding Titan at the northern pole is significantly reduced during the equinox because of the atmospheric circulation patterns. This is all very surprising because we didn’t expect to find any such rapid changes, especially in the deeper layers of the atmosphere.”

Coustenis explains why it is important to investigate this distant moon: “Titan is the best opportunity we have to study conditions very similar to our own planet in terms of climate, meteorology and astrobiology—and at the same time it is a unique world on its own, a paradise for exploring new geological, atmospheric and internal processes.”