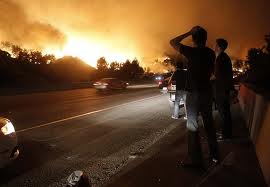 On September 14, 2012 at 3:36 PM, a fire broke out along Sepulveda Boulevard near Getty Center Drive, just east of the 405 freeway. First arriving firefighters reported two acres burning in heavy brush. The blaze quickly spread beyond the capability of the initial responders and further assistance was immediately requested.

According to LAFD Information weather conditions included extreme heat and low relative humidity. The Brush Burning Index was High at a reading of 104. The lack of strong wind was the only help mother nature provided firefighters.

An aggressive attack with hose-lines and precise aerial water drops ensued as flames quickly continued to spread eastward to over 10 acres. Firefighters were strategically placed to protect threatened residences. Additional air support was needed as well as assistance from neighboring departments. Los Angeles County FD helicopters, hand crews, and fixed winged Super Scoopers were deployed to help battle the blaze. In addition, Beverly Hills, Culver City, and Santa Monica Fire Departments assisted the LAFD. At the peak of the fire there were over three hundred firefighters from five agencies fighting the blaze, many of whom kept the devastating 1961 Bel-Air fire in the back of their minds.

Even with all this manpower and equipment the flames quickly scorched 70 acres and was 40% contained by 7:00 PM Friday. Crews continued to tirelessly hike ridge lines, using hand tools to cut a fire barrier.

No formal evacuations were issued, however residents were cautioned to be ready to leave at a moment’s notice if conditions worsened. At one point on Friday, The Getty Center voluntarily evacuated, eight Torahs were removed from Leo Baeck Temple as a precaution, and Mount St. Mary’s College cleared the campus. Later that evening Sepulveda Boulevard reopened to commuters, which alleviated traffic havoc in an area already cluttered with construction equipment associated with the widening of the freeway.

Sepulveda Pass 90 Acre Brush Fire ExtinguishedRotating shifts of firefighters remained on scene for three days, then early Sunday afternoon they peered victoriously over 90 scorched acres that was finally 100% contained. Firefighters then began picking up thousands of feet of hose-line and equipment draped across steep rugged terrain.

Once units demobilized, two Brush Patrols and one Engine Company maintained a “Fire Watch” to quickly extinguish any possible flare-ups until a reevaluation on Monday morning.

Due to the tenacious work and amazing job of all firefighters and many allied agencies, all under the command of Assistant Chief Kwame Cooper, we are proud to state that no structures were damaged and no one was injured.