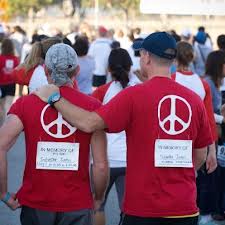 For 14 years now, Alive & Running 5K Walk/Run has raised valuable funds to support the Didi Hirsch Suicide Prevention Center. In the United States, a person dies by suicide every 15 minutes, claiming more than 36,000 lives a year. Suicide is the fourth leading cause of death in the U.S. among adults 18-65, the second leading cause of death among teens and young adults, and seniors ages 65 and older account for 16 percent of all suicide deaths. Suicide has recently become the leading cause of death in veterans. This is a public health issue that does not discriminate by age, gender, ethnicity or socio-economic status.

The Alive & Running 5K is a fun and heart-warming way to increase suicide awareness. This family-oriented event features a Kiddie 1K, an entertaining program featuring Chikara Taiko Drummers, Cadet Corps and Color Guard from Walter Reed Middle School, and an Expo with lots of vendor booths, balloon artists and snow cones. We also display our Memorial Banner, filled with pictures and names of the loved ones we lost to suicide.

More than 1,000 runners, walkers, spectators and volunteers from all over Southern California will join together at Alive & Running to raise awareness and funding for suicide prevention services.

Sign up to register and create a team, join an existing team, or donate to a friend’s fundraising campaign. Registration fee for the 5K is $25.00, on the day of the event the fee is $30 (a tax deductible donation). A free “Kiddie-K” (1K) will also be held following the start of the 5K. For more information or to sign up, visit http://www.facebook.com/l/6AQHZAcmHAQEB_3kfOqpQ9odG6hCIxNr-MpMIuqzjkUc-PQ/www.aliveandrunning.org or email [email protected]

WHERE: Just north of LAX at West 88th Street and La Tijera Boulevard in Westchester

WHY: In the United States, someone takes their life every 15 minutes. More than 5 million people in this nation have lost a loved one to suicide. In the adolescent population, for every loss of life by suicide there are an average of 100 to 200 attempts. The need to give hope to those contemplating suicide has never been more urgent.

Nationally recognized for its Suicide Prevention Center and mental health and substance abuse services, Didi Hirsch operates a 24-hour English/Spanish crisis line to counsel callers in great emotional stress and help them cope with suicidal thoughts. The Suicide Prevention Center also provides support for those who have lost a loved one to suicide as well as outreach and training to the community. Its Suicide Response Team works with the Mayor’s Crisis Response Team and local emergency services, including the LAPD, FBI and area fire departments to provide immediate support at the scene of a suicide.

Proceeds from the event will directly benefit Didi Hirsch’s Suicide Prevention Center. Founded in 1958, the Suicide Prevention Center (SPC) provides critical services to people who are contemplating suicide and those affected by the suicide of loved ones. SPC was the first in the U.S. to establish a 24-hour suicide prevention crisis line and has since been the model for crisis lines around the country—and the world.