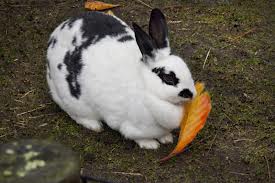 These weren’t the light brown cottontails that live in and around the Ballona Wetlands. The group of bunnies that Lisa Fimiani and others were chasing last week in the freshwater marsh near Playa Vista were either nearly all white, or white with black or brown markings.

According to the Daily Breeze, the marsh’s manager, Edith Read, spotted five, but soon there were nine.

And so Fimiani and Read, with a pair of Loyola Marymount University graduate students who work at the marsh, gathered near Lincoln and Jefferson boulevards with carrots, lettuce and nets, taking a little less than two hours to round up the misplaced rabbits.

“They were obviously someone’s pets,” said Fimiani of the nonprofit Friends of Ballona Wetlands, which does restoration work and leads tours in the habitat near Marina del Rey.

And now the bunnies are her Culver City houseguests.

Not wanting to take the animals to a shelter where they could be euthanized, Fimiani is keeping them in backyard enclosures, working on getting the rabbits spayed and neutered, and communicating with a rescue group about finding each animal a proper home far away from Ballona.

But there are various other complications with dumping domesticated animals in the freshwater marsh and the nearby state reserve – which already has its share of non-native inhabitants.

Fimiani said an exotic guineafowl was found dead recently at the freshwater marsh. The bird, presumably a pet that had been let free, used to reside in a park in nearby Playa Vista before it was spotted in the marsh, she said. “We suspect it was a raccoon or a cat or even a dog [that killed it].”

At Ballona, some presume the recently captured bunnies could have become prey to a feral cat or a red fox, a population state wildlife officials tried to control in the 1990s with a controversial trapping and euthanasia program.

If they’d escaped predators, domesticated rabbits aren’t used to living the way the native cottontail species are, said Karina Johnston, an ecologist with the Santa Monica Bay Restoration Commission who has been collecting data on area plant and animal species.

“It’s much hardier, and it’s actually adapted to life in the sun,” Johnston said of the cottontail. Pet rabbits “are definitely not tolerant of the conditions of these habitat types.”

And the animals could have posed problems if they fed on native plant species or started to multiply in number. Said Johnston: “They might even breed so much that they start out-competing other species.”

Capturing the rabbits near the marsh was simple enough, but Fimiani said caring for them when she already has two pet cats has been somewhat of an odyssey. It’s also meant paying for food, crates and veterinary care.

Still, she’s apparently taken by the four male and five female bunnies that have been given names and a temporary home. “They’re so sweet,” Fimiani said.