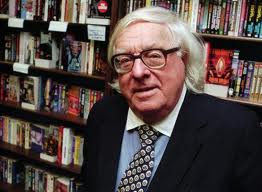 CURIOSITY BEGINS DRIVING AT BRADBURY LANDING – Mars rover Curiosity has begun driving from its landing site, which scientists have named for the late author Ray Bradbury.

Curiosity’s first drive on the Martian surface combined forward, turn and reverse movements. This placed the rover roughly 20 feet from the landing spot.

NASA has approved the Curiosity science team’s choice to name the landing ground for the influential author who was born 92 years ago and died this year. The location where Curiosity touched down is now called Bradbury Landing.

“This was not a difficult choice for the science team,” said Michael Meyer, NASA program scientist for Curiosity. “Many of us and millions of other readers were inspired in our lives by stories Ray Bradbury wrote to dream of the possibility of life on Mars.”

Curiosity’s first drive confirmed the health of its mobility system and produced the rover’s first wheel tracks on Mars, documented in images taken after the drive.

Curiosity will spend several more days of working beside Bradbury Landing, performing instrument checks and studying the surroundings, before embarking toward its first driving destination approximately 1,300 feet to the east-southeast. 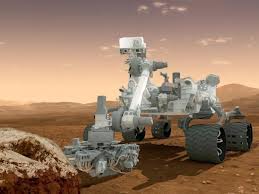 IN A CAREER SPANNING MORE THAN 70 YEARS, Ray Bradbury inspired generations of readers to dream, think and create. A prolific author of hundreds of short stories and nearly 50 books, as well as numerous poems, essays, operas, plays, teleplays, and screenplays, Bradbury was one of the most celebrated writers of our time.

His groundbreaking works include “Fahrenheit 451,” “The Martian Chronicles,” “The Illustrated Man,” “Dandelion Wine,” and “Something Wicked This Way Comes.” He wrote the screenplay for John Huston’s classic film adaptation of “Moby Dick,” and was nominated for an Academy Award. He adapted 65 of his stories for television’s “The Ray Bradbury Theater,” and won an Emmy for his teleplay of “The Halloween Tree.”

To see a clip of Bradbury reading, go to:

Bradbury has illuminated the lives of many Southern Californians for a half-century or more, with his frequent personal appearances at libraries and other public venues. On November 12, 1971, on the eve of the arrival in Mars orbit of Mariner 9, the first spacecraft to orbit Mars or any other planetary body, Bradbury participated in a symposium at Caltech. In addition to Bradbury, the symposium panel at this landmark event consisted of: Arthur C. Clarke, science fiction writer; Walter S. Sullivan, science journalist for the New York Times; Carl Sagan, astronomer; and Bruce Murray, planetary scientist.

In discussing the upcoming orbital insertion and what scientists expected to see on this first-ever close encounter with Mars, Bradbury read his unpublished poem, “If Only We Had Taller Been,” from which we have excerpted one stanza:

Oh Thomas, will a race one day stand really tall?
Across the void, across the universe and all,
and measured out with rocket fire,
at last put Adam’s finger forth; as on the Sistine ceiling,
and God’s hand come down the other way, to measure man,
and find him good, and gift him with forever’s day?

This poem was subsequently published by A. Knopf in the 1973 collection of Bradbury poetry entitled “When Elephants Last in the Dooryard Bloomed.”

The story of this historic symposium is told in the words of its panel members in the 1973 book “Mars and the Mind of Man” by Carl Sagan (available at the Los Angeles Public Library).