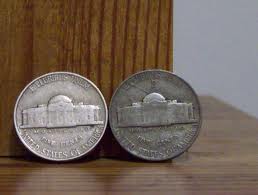 A Culver City ‘coin collector’ has been charged in connection with a World War II nickel scam he allegedly orchestrated on EBay, the state attorney general’s office announced Wednesday.

According to the Los Angeles Times, the clue most folks missed was that the 5-cent coin used during World War II was made of copper alloy, manganese and silver, the U.S. Mint said. Nickel was saved for the war effort.

But eight people bought the fake coins — for $5,750 each — without knowing it and paid Berlin through his PayPal account, according to a complaint filed July 25 in Los Angeles County Superior Court. When customers didn’t get their purchased items after trying to contact Berlin several times, proseuctors said, they filed claims with eBay.

The online auction site lost nearly $60,000 reimbursing the buyers, according to court documents.

Prosecutors said Berlin, who has previous convictions including theft and mail and check fraud, pleaded not guilty to nine charges of grand theft. His next court appearance is scheduled for November.