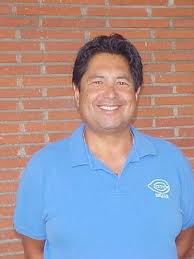 Hopeful and optimistic, Culver City High School boys soccer coach Dave Sanchez says his current challenge makes him stronger. Diagnosed this year with pancreatic cancer, Sanchez is a living miracle said his wife Chevy who shares his daily trials on CaringBridge.org as an inspirational and educational platform.
The former Centaur Coach of the Year will be honored as Grand Marshall of Fiesta La Ballona, Aug. 25, 11:45 a.m. at opening ceremonies by former Culver High instructor and athletic director Jerry Chabola.
“Ya’ gotta believe. Dave will win this battle with all of your support. No one is tougher and more courageous than Coach Sanchez,” said Chabola at his recent retirement dinner.
Observing an interest in sports by his children, Sanchez, an athlete who excelled in numerous high school sports, volunteered as coach for his kids’ teams in the Y-Winners program, AYSO, and Culver City Little League. Other parents and youth soon clamored for Sanchez to coach their teams. He later created the Culver City Middle School athletic program and went on to teach and coach soccer and cross country at Culver High.
He changed the lives of many individuals, according to former Centaur athletes and officials.
“Players could have made bad choices, but Dave showed them the importance of continuing their education,” said Chevy.
“He helped students look at their options. I can’t tell you how many information cards he filled out to motivate universities to recruit these kids. He hustled for them,” said Chevy.
An Army brat, Sanchez lived in 23 places in 17 years, settling in Indianapolis before moving to Culver City in 1980. The Lindberg Park resident is dad to Aaron, Kurt, Nate, Kety, and Nikko.
“I am blown away by the support and love from the school district, colleagues, parents and students. I am touched by your thoughts, prayers and well wishes. All of you give me joy and comfort. We live in a special community,” said Sanchez.
Fiesta La Ballona (www.FiestaLaBallona.org) is held August 24-26 at Veterans Park, 4117 Overland Ave. Culver City.