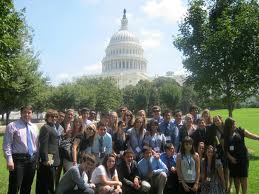 The City Council Meeting August 6 started off with a presentation by the Sister Cities Committee, and Aug. 7 marked the end of the second exchange of the summer as students from the U.S., Canada, and Mexico finished out their civics week in Washington, D.C.

Students returning from Kaizuka, Japan spoke to the council about their experiences, and leaders Barbara Honig and Marla Wolkowitz added the offer of a gift to the city; a signpost showing the distance from Culver City to our sister cities in Mexico, Japan, Canada and Korea. “We’d like it to be on the corner in front of city hall, so that people can see the distance from the center of our city to theirs.”

For the first two weeks of the exchange the students, representing nine cities and three countries, travelled to California where they spent time in the Los Angeles area and visited their sister cities of
Los Angeles, Modesto, and Culver City. Activities included biking in Yellowstone, volunteering at the Red Cross, exploring the aquarium and Santa Monica pier, and enjoying a day in Disneyland. The last week in D.C. included visits to Capitol Hill, the U.S. Department of State, the Canadian Embassy, the Organization of American States, Sister Cities International’s office, volunteering at D.C. Central Kitchen, and trips to Mount Vernon, the Smithsonian museums, and the National Zoo.

Throughout the exchange the students were tasked with formulating a community project which they will spend the next year implementing in their city. Utilizing lessons learned during the workshops, resources from the community, and each other, Culver city will be excited to see what these young ambassadors create in the coming months.

The organizers also offered their thanks to all of the cities who participated – the local coordinators who volunteered their time to help recruit participants and plan wonderful homestay programs, the adult participants who took three weeks to accompany the group, and the students who showed initiative, enthusiasm, and dedication to the sister city movement. This program was made possible bythe U.S. Department of State, Bureau of Educational and Cultural Affairs.

Pictures and updates will be available at
www.sister-cities.org/youth-ambassador-program-trilateral-north-america in the coming days.