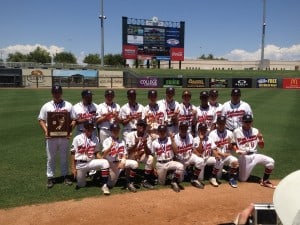 The Westchester 14u Babe Ruth all stars defeated Hawaii twice on Saturday to earn the Pacific Southwest Regional Title. The win sends the Westchester 15 to the World Series in Murray, Utah beginning on August 18.

Hawaii started the day undefeated, but couldn’t handle Westchester’s ace Anthony Chavez or hard throwing closer Grant Craddolph. Westchester jumped out to a 5-0 lead, but Hawaii caught up to Westchester in the fifth inning, 5-5. The game remained tied until the bottom of the seventh and final inning. Chavez led off the seventh for Westchester by getting hit by a pitch. Carlos Jacobo followed Chavez with a line single to right. A.J. Inatsugu sacrificed the runners to second and third. Hawaii then intentionally walked Avery Allen. Ethan Lazar then belted a fly ball to right, scoring Chavez with the winning run.

Game two followed thirty minutes later, and it was apparent that the 110 degree temperature was taking a toll on Hawaii. Westchester called upon Matthew Kaplan to start the game on two day’s rest. Kaplan was the winning pitcher against Nevada on Wednesday and got the save on Friday. Kaplan, who hadn’t given up a run in either game, completely dominated Hawaii, throwing a four-hit complete game shutout in Westchester’s 4-0 title clinching game.

Amazingly, Kaplan was left off of the all-tournament team. However, Anthony Chavez and Avery Allen both made that team, and Carlos Jacobo was named the Most Outstanding Player. Other Westchester players could have easily earned all-tournament honors including second basemen Christian Amador who provided stellar defense and timely hitting, and Matthew Kanfer who was involved in virtually every Westchester big inning.

Carlos Jacobo was predictably humble about winning the Most Outstanding Award. “There are so many players who contributed to our tournament victory. It’s impossible to pick just one player. While I won the award, it is certainly a team award, not an individual award. I’m excited about the chance to go to the World Series. It’s a once in a lifetime event, and I can’t wait to get there.”