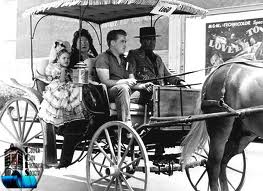 Some townspeople define Fiesta La Ballona as a celebration of Culver City’s heritage; others call the annual “Party in the Park” a huge community reunion.  Either way, they agree the former La Ballona Days has a past and a present.
Once considered a place to drive by on your way to somewhere else, “Culver City has become Los Angeles’s newest stylish neighborhood, a magnet for lovers of the arts, good food and culture. One part Hollywood nostalgia, one part modern design, the city-within-a-city now inspires expressions like “nascent Chelsea” and “L.A.’s new restaurant mecca,” according to a 2007 New York Times article describing the city’s renaissance.
We have turned back the clock to fulfill the declaration of the advertisements penned by Culver City founder Harry H. Culver a century ago: All Roads Lead to Culver City.
As it develops more shopping, dining and leisure amenities and expands its entertainment industry tentacles, Culver City prospers while tightening its belt under challenging fiscal conditions.
And as this town looks forward, it pauses each year to reacquaint itself with what got “The Heart of Screenland” to where it is today.
Fiesta La Ballona Days began in 1951 as a weeklong celebration of local heritage.
In those days when times were simpler and the city was smaller, police and firefighters lived in town, and many participated as volunteers to direct traffic and close down streets for Fiesta.
The annual festival had historic significance for the captain of the Culver City Police Dept., a fifth generation Californian born on the Lugo Ranch in 1908, who took his daughter, Julie, and family to the Natural History Museum every Fiesta La Ballona to see portraits of his family’s ancestors.  Charlie’s birth certificate read “Baby Lugo, Palms,” probably punishment for being the eighth child.
“During those early Fiestas, daddy worked at his police duties often in a Caesar Romero costume on loan from MGM,” said Julie Lugo Cerra, Culver City historian and author of four books and some 400 articles on local history.
Cerra said a pair of jeans as western attire or a little creativity to garb as an Indian, Mexican or Spaniard was all it took to keep one out of the Pokey, the jail on wheels, during Fiesta week.
“La Ballona Days was inclusive, a little like St. Patrick’s Day, when anyone who wants to, can be Irish,” said Cerra.
Firley Cleveland, manager of the water company, dressed as a monk one year, said Cerra.
Led by the Chamber of Commerce, activities in the 1950 La Ballona Days appealed to every sector of the community, including luncheons, hobby and antique car shows, beard-growing race, and contests for the Queen and Little Queen and their courts.
Flaunting a red rose in her braided hair next to a Mother of Pearl comb and lace, Patrice Irwin Bricker participated in the Little Miss Culver City contest in the 1950’s bedecked in make-up, blouse, petticoat, sash and ballet slippers.
“I was so excited when I was chosen. My happiest memories as a child in Culver City are of La Ballona Days,” Bricker said.
Dances and barbecues heralded two parades, one down city streets and one for children at Veterans Memorial Park.  Descendants were featured in equestrian units, vintage cars and floats.
“We all lined up on Higuera Street for the big parade, which honored the early families with names like Machado, Talamantes, Ybarra, Rocha, Saenz, Higuera and Lugo. The descendants took pains with their costumes,” said Cerra.
The new Culver Center shopping center drew crowds to its Thieves Market sidewalk sale for charity.
The Aquacade in the new plunge presented synchronized swimming interspersed with clowning antics under the stars.
“If I learned anything at all from the early Fiestas, it was commitment to community and the joy of sharing time and traditions with others,” said Cerra.
Fiesta La Ballona (www.FiestaLaBallona.org) is held August 24-26 at Veterans Park, 4117 Overland Ave. Culver City. Don’t forget to Like us on Facebook .