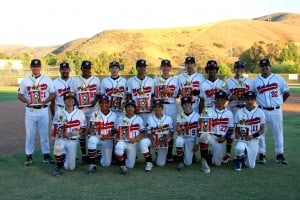 Westchester will travel to Surprise, Arizona on July 31 to compete for the United States Pacific Southwest Regional title. If successful, the team will then travel to Utah for the Babe Ruth 14U World Series.

Manager John Lapatto explained, “The program at Westchester is fantastic, and we couldn’t be where we are today without the amazing support of our community, as well as Westchester Babe Ruth and its President, Chris Lynch. I’m very proud of the boys, they showed a lot of heart and determination (the team was down 10-1 in the 4th inning at El Segundo, and then exploded for nine runs in the top of the fifth en route to a 12-10 victory). Many of these boys were on the State championship last year as 13 year olds, and we are building on that success. Being State Champion in back to back years is truly amazing. Winning the Southern California State Championship this year is an incredible achievement, and I expect great things in Arizona.”

The Westchester team will be fundraising to help defer some of the costs of the Arizona trip. Fundraising events are tentatively scheduled at Tortilla Cantina (1225 El Prado Avenue, Old Torrance) and Round Table Pizza (2701 Pacific Coast Highway, Hermosa Beach). Team fundraising chair Terrie Chavez mentioned that the team is looking for additional fundraising opportunities as well. If interested in hosting a fundraising event and/or donating, please contact Terrie at [email protected]