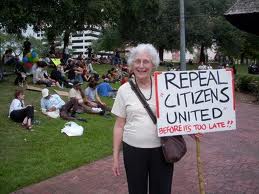 Yesterday the California legislature went on record supporting a constitutional amendment to overturn the Citizens United Supreme Court decision.This makes California the sixth state in the nation to do so, and the passage of this resolution will give a huge boost to similar efforts that are happening in other states.

One of the bill’s authors, Assemblyman Bob Wieckowski, specifically noted 50,000 Californians wrote to the legislature in support of this resolution. This fight was only won because of a large statewide coalition including Public Citizen, CalPIRG, CREDO, Common Cause, California Church IMPACT, Free Speech for People, California Labor Federation, California League of Conservation Voters and many other organizations.

This is not the end of the fight, but it’s a good first step.