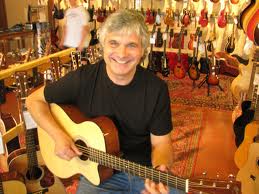 Two-time Grammy-Award winning guitar artist Laurence Juber will be at Boulevard Music, and you want to be there.

Known for playing lead guitar in Wings from 1978 to 1981, Juber, known as ‘LJ’, has since had a distinguished career as a solo finger-style guitarist. A world-class guitar virtuoso solo artist, composer and arranger, LJ fuses folk, jazz, and pop styles and creates a dynamic multi-faceted performance that belies the use of only one instrument.

Laurence has released 20 acclaimed solo albums since Wings folded, including two volumes on The Beatles and one on his former group with McCartney. His latest, Soul of Light, is a retrospective collection of original compositions that span over 30 years of creative work on solo guitar. All newly recorded, some of these tunes may be familiar from being heard on TV and radio, while others have been touchstones of the solo guitar.

“I started out as a composer for solo guitar and I’ve written well over a hundred tunes. The compositions on Soul of Light reflect a particular mood – one of romance,” Juber says. “Not only pure love songs, but also in the sense of using imagination and narrative to expand and transcend the traditional solo guitar genre. It also serves as a complement to the blues/jazz direction that my current composing and arranging is taking me.”