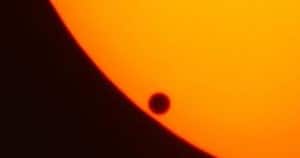 On Tuesday afternoon, June 5th, everyone in the United States will have a chance to witness one of the rarest celestial phenomena known: a “transit of Venus.” Such an event occurs when the planet Venus passes exactly between the Earth and the Sun, and these events are incredibly rare. Since first predicted by the German mathematician and astronomer Johannes Kepler in the 17th century, only six transits of Venus have ever been observed. Weather permitting, the transit on June 5th will be the seventh.

Transits of Venus occur at regular intervals that repeat over a 243-year period. Intervals between successive transits are 8 years, 105.5 years, 8 years, and 120.5 years. The next transit of Venus won’t occur until December 11, 2117.

Kepler predicted the transit of December 7, 1631, but died before the event occurred. The next transit, on December 4, 1639, was observed by only two individuals, Jeremiah Horrocks and William Crabtree, from England.

In 1677 Edmond Halley (of Halley’s Comet fame) observed a transit of Mercury from St. Helena Island and realized that such events, if observed from many widely-spaced sites, could provide an exact geometric measure of the size of the solar system. His work led to several far-flung expeditions to observe the Venus transits of June 6, 1761 and June 3, 1769. One of the British expeditions to the latter transit was led by Captain James Cook and sparked Cook’s discovery of Tahiti and Australia. Scientific results from these expeditions were mixed, but enough experience was gained to attempt observations of the next series in the late 19th century.

The transits of December 9, 1874, and December 6, 1882, were met with an armada of scientific expeditions equipped with state-of-the-art astronomical instruments. The U.S. Congress funded and outfitted eight separate expeditions for each event and placed overall scientific direction of these teams under the command of the U.S. Naval Observatory. Once again the results were inconclusive, but many of the instruments from these expeditions are still in the Naval Observatory’s possession.

The 20th century saw no transits of Venus; the next one occurred on June 8, 2004. By this time the size of the solar system had been well-established, so observing the Venus transit became more of an historical event than a scientific one.

HOW YOU CAN VIEW THE TRANSIT

In California, this year’s transit will begin at 3:06 p.m. Pacific Daylight Time. Mid-transit is at 6:25 p.m., and the Sun sets at 8:02 p.m.—before the end of the transit. Do NOT look at the Sun without eye protection. If you have eclipse-viewing glasses left over from the recent solar eclipse, they will provide the needed protection for viewing this event as well. However, Venus will be a very small dot on the Sun’s disk and a bit difficult to see without magnification.

A better way to see the transit is to go to Griffith Observatory, which will be set up to show and explain the event. It will be open June 5 from 12:00 noon to 10:00 p.m., with viewing via the coelostat in the Observatory as well as telescopes on the lawn. Observatory staff will be giving talks and explanations throughout the event. Viewing filters and eclipse glasses will be available for purchase at the gift shop. Because of the large crowd expected, it would be best to check with Griffith for parking instructions.