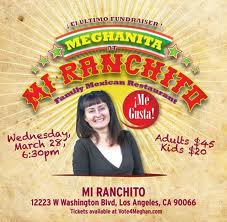 Meghan Sahli-Wells was recently honored with endorsements from the Los Angeles League of Conservation Voters, 47th Assembly District Democratic Club, the Sierra Club, and Culver City Employees Association, and as well as the support of the Beverly Hills/Greater Los Angeles Association of Realtors.

Los Angeles County Supervisor Mark Ridley-Thomas said, “As the City’s representative on the Board of Supervisors, I know the issues facing Culver City and its people, and I know Meghan Sahli-Wells will work tirelessly for the betterment of the City and the benefit of its people.”

“Meghan’s strong commitment to Culver City residents and balanced approach to leadership are why I am so proud to endorse her in the 2012 election,” stated Assemblymember Holly Mitchell, who serves California’s 47th Assembly District.

“In the years she has spoken before the Council, Meghan has shown herself to be a strong, consistent, advocate for Culver City residents,” noted City Council Member Christopher Armenta. “From development to environment to education to transportation, she has the knowledge and experience to lead our city toward a healthy future.”

School Board Member Patricia Siever said that Meghan, “…has demonstrated her keen understanding of the political, economic and social challenges that confront Culver City, and she has proposed well thought-out resolutions that pertain to those issues.”

Meghan’s upcoming campaign fundraiser at Mi Ranchito Family Restaurant on Wednesday, March 28, 6:30 pm will be her third, following successful fundraising events at Culver City’s Actors’ Gang Theater and La Dijonaise Restaurant. Please join us for this fun and filling time for the whole family! Enjoy delicious food, exciting company, and the good feeling you get helping a worthy cause. Bring the kids to this one! Reserve your place at the table through Meghan’s campaign website at www.vote4meghan.com.