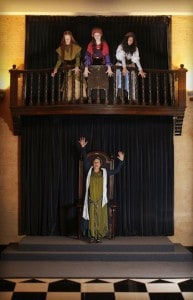 Overtone Industries will present the world premiere of its new opera The Woman in the Wall, with two weekends of performances opening Friday, March 23 at the Masonic Lodge in Culver City. Reuniting the award-winning Overtone creative team of the critically-acclaimed 2010 Songs & Dances of Imaginary Lands, The Woman in the Wall is an operatic work by Composer O-Lan Jones and Librettist Kathleen Cramer, conducted by David O, and produced by Vibrant Production Management.

Inspired by the 14th Century tradition of The Anchoress, the opera is a “mystery play” in the ancient tradition; it explores the openings and paths inside that are revealed when all doors are locked shut.

The subject of the production is inspired by the 14th Century tradition of The Anchoress – a woman who volunteers to be enclosed for the rest of her life in a church cell – with one window open to the sacred world and the other open to the ordinary world. Over the course of seven days, which cover seventeen years, we follow The Anchoress, “Marianna” (Gretchen Johnson), as she becomes the inspirational advisor to everyone from the peasants to the king. As we follow her journey inward through her temptations, doubts, revelations, and fears, we see how she transforms the people’s questions in relation to the Seven Virtues that light her way. Ultimately, the work is a “mystery play” in the ancient tradition; it explores the openings and paths inside that are revealed when all doors are locked shut. The production features an orchestra of 10 instrumentalists, a cast of a dozen principal singers, and a 30-member chorus from the Angel City Chorale, led by Sue Fink.

The opera, which is written in Medieval modes using instruments of the time, will run for two weekends – on Fridays and Saturdays – from March 23 to March 31 with performances starting at 8 pm. Ticket prices are $25 for Peasants (seating closest to the performers), $40 for Royalty (seating in the middle of the performance space), and $50 for the Virtuous (reserved seating on an elevated platform). Online ticket sales start on Monday, January 30, 2012 and can be purchased via www.overtoneindustries.org or by calling Overtone Industries at 323-655-2410. Performances, which are ceremonial in nature, will be held in the atmospheric Masonic Lodge at 9635 Venice Boulevard, Culver City, CA 90232 (culvercitymasons.org; 310-836-0467). The show is suitable for mature teen and adult audiences.

Editor’s Note – If you saw Songs and Dances of Imaginary Lands, you won’t need much more to recommend this- If you are new to Overtone, don’t miss it. Theater of an amazing and original caliber, music that will haunt your dreams, and a moment to consider time itself. Get to this show.