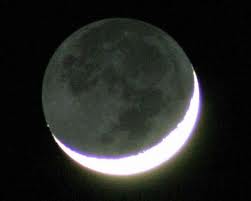 By observing the Moon using the Very Large Telescope at European Southern Observatory (ESO) in Chile, astronomers have found evidence of life in the universe—on Earth!

Finding life on our home planet may sound like a trivial observation, but the novel approach of an international team may lead to future discoveries of life elsewhere in the universe. The work is described in a paper in the March 1 issue of the journal Nature.

“We used a trick called earthshine observation to look at the Earth as if it were an exoplanet,” says Michael Sterzik (ESO), lead author of the paper. “The Sun shines on the Earth and this light is reflected back to the surface of the Moon. The lunar surface acts as a giant mirror and reflects the Earth’s light back to us—and this is what we have observed with the VLT.”

The astronomers analyze the faint earthshine light to look for indicators, such as certain combinations of gases in the Earth’s atmosphere, which are the telltale signs of organic life. This method establishes the Earth as a benchmark for the search for life on planets beyond our solar system.

The fingerprints of life, or biosignatures, are hard to find with conventional methods, but the team has pioneered a new approach that is more sensitive. Rather than just looking at how bright the reflected light is in different colors, they also look at the polarization of the light, an approach called spectropolarimetry. By applying this technique to earthshine observed with the VLT, the biosignatures in the reflected light from Earth show up very strongly.

Co-author of the study Stefano Bagnulo (Armagh Observatory, Northern Ireland, United Kingdom) explains the advantages: “The light from a distant exoplanet is overwhelmed by the glare of the host star, so it’s very difficult to analyze—a bit like trying to study a grain of dust beside a powerful light bulb. But the light reflected by a planet is polarized, while the light from the host star is not. So, polarimetric techniques help us to pick out the faint reflected light of an exoplanet from the dazzling starlight.”

The team studied both the color and the degree of polarization of light from the Earth after reflection from the Moon, as if the light was coming from an exoplanet. They managed to deduce that the Earth’s atmosphere is partly cloudy, that part of its surface is covered by oceans and—crucially—that there is vegetation present.

When light is polarized, its component electric and magnetic fields have a specific orientation. In unpolarized light the orientation of the fields is random and has no preferred direction. The trick used in some 3D cinemas involves polarized light: separate images made with differently polarized light are sent to our left and right eyes by polarizing filters in the glasses. The team measured the polarization using a special mode of the FORS2 instrument on the VLT.

Earthshine, sometimes called the old Moon in the new Moon’s arms, can easily be seen with the unaided eye and is spectacular in binoculars. It is best seen when the Moon is a thin crescent, about three days after new Moon. As well as the bright crescent the rest of the lunar disc is visible, dimly illuminated by the bright Earth in the lunar sky.

THE NEXT TIME YOU SEE a slim crescent Moon, look for that twice-reflected sunlight. Reflections can be wonderful—out in the Universe and here at home.

The Moon’s unlit side
Is glowing with light tonight—
The light we give off.

Someone’s gloomy side
Lights up because of your smile—
The light you give off.