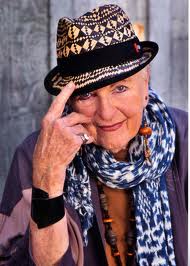 The City of Culver City will present a webcast and cablecast of My Brazil, recorded during last autumn’s Speak Easy program, starting on February 18, 2012. My Brazil features performance art icon Rachel Rosenthal, who originally wrote and performed the piece in 1979, and performer/composer Amy Knoles. Ms. Rosenthal read the performance text again on November 9, 2011 at the Culver Events Center, on the occasion of her 85th birthday, for the City’s Speak Easy program as part of Pacific Standard Time: Art in L.A. 1945-1980, initiated by the Getty. My Brazil is an autobiographical piece, inspired by the journey of Rosenthal’s family during World War II when they escaped the Nazi occupation of France and moved to Rio de Janeiro, Brazil. In order to provide greater access for this unique and memorable performance, the video of My Brazil will be posted on the Arts & Culture page of the City’s website at www.culvercity.org. Also, it will be cablecast on Channel 35 in Culver City through Comcast and on Channel 37 through Verizon Fios on Saturday evenings at 9pm from February 18 through April 28, 2012. The running time for My Brazil is 45-minutes and it is recommended for viewers 18 years and older due to mature themes and occasional strong language. More information on the webcast and cablecast is available by visiting www.culvercity.org or calling the Cultural Affairs Hotline at (310) 253-5716.

Rachel Rosenthal, Artistic Director and founder of The Rachel Rosenthal Company, is an interdisciplinary performer who developed a revolutionary performance technique that integrates text, movement, voice, choreography, improvisation, inventive costuming, dramatic lighting and wildly imaginative sets into an unforgettable “total theater” experience. In the last twenty-five years of her performing career she presented over 40 full-scale pieces nationally and internationally. She created the experimental Instant Theatre, performing in and guiding it for ten years. She was a leading figure in the L.A. Women’s Art Movement in the 1970s, co-founding WomanSpace, among other projects. In 2000 she was honored by the City of Los Angeles as “a Living Cultural Treasure of Los Angeles”. Retired from the stage, Rosenthal resumed a long dormant career in visual art and is currently working in oil and watercolor. In addition to her work in the visual arts, Rosenthal is Artistic Director of a new ensemble of performers called TOHUBOHU! Extreme Theatre Ensemble who present evenings of Total Improvisation regularly in her studio space.

Amy Knoles has spent her career attempting to redefine the crossroads of music composition, multimedia art, and technology. Her solo works draw on a huge variety of source material from throughout history, language and culture as well as from her own personal imagination. Medieval polyphony, modern urban rhythms, atonal deconstructions and classic melodies have all been filtered through the lens of her idiosyncratic voice at one time or another. Knoles has been the Executive Director of the California E.A.R. Unit for thirty years, and has recently created the department of Electronic Percussion for CalArts. She has worked with the Los Angeles Philharmonic, Kronos Quartet, Pierre Boulez, Rachel Rosenthal, the Los Angeles Master Chorale and many others.

Speak Easy, a City program featuring spoken word and live music, has been annually presented in association with PEN Center USA and sponsored by Sony Pictures Entertainment. The City of Culver City is a participant in Pacific Standard Time: Art in L.A. 1945-1980. This unprecedented collaboration, initiated by the Getty, brings together more than sixty cultural institutions from across Southern California to tell the story of the birth of the L.A. art scene. The presenting sponsor of Pacific Standard Time: Art in L.A. 1945-1980 is Bank of America.

Editor’s Note – If you couldn’t get into Speak Easy, now you can find out why. Rosenthal is an amazing storyteller and this is a great opportunity to see her in top form. Don’t miss it-